Here’s a photo of a bus crew in about 1969, taking a lunch break in Blackhorse, Bristol. I came across this image by chance, while my father-in-law was scanning his collection of colour transparencies onto his computer. 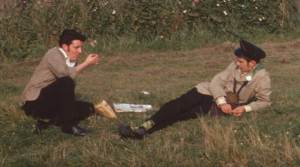 The subject of the photograph wasn’t the bus crew, in fact they only occupy a corner of the image. The main event (the opening of a new church building) was taking place behind them. I’ve cropped everything else out to illustrate the uniform of the time and to chuckle at the Elvis hairstyle and loud socks. Curiously, the conductor has placed the chin strap (normally an obsolete feature, just above the cap’s peak) over the top of the cap. I wonder why?

Their green and cream Bristol Omnibus steed, probably a Bristol LD or FLF, was out of shot to the left.

I’m interested to note that, although both the conductor and driver are wearing summer dust jackets, the conductor’s cap doesn’t have a white top. Some operators issued these removable fabric covers (or ‘gloves’) to crews in the summer but the practice doesn’t seem to be as widespread in Tilling group companies as I’d thought. I’ve seen another image recently of a Western National crew wearing summer jackets but not white topped caps. Words of wisdom, anyone?