And so another seasons ends. The final weekend of services on the ‘Exmoor Explorer’ route was operated under clear skies and brilliant sunshine. A bonus for bus enthusiasts on Sunday was the addition of a Leyland PD3 parked behind our Bristol Lodekka during the lunchtime break between services. 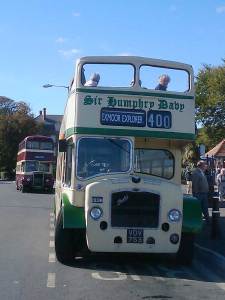 XTF98D is a Leyland PD3, built in 1966 for the Haslingden (Lancashire) corporation as their Fleet No 1 but renumbered 45 when that company’s fleet merged with that of Rawtenstall to form ‘Rossendale’, whose livery it wears today. It had just dropped off a private party outside the railway station at Minehead.

A large number of people turned out at the weekend to have a last ride of the season on the 400. Many of these were local people, regular passengers who were familiar, friendly faces. Mike, Val, Brian, Don and Janice – I hope you all enjoyed the trip as much as I did! We carried 46 on the Saturday afternoon trip which was not a full load by any means (our Western National Lodekkas can seat 70) but very good for the end of the season. My youngest son was on board on the Saturday having his final training session as a conductor. If all goes to plan, he and I will be a driver/conductor partnership next season.

The air was crystal clear on both days and the view across the Bristol Channel to Wales was stunning. Needless to say, many photos were taken from the top deck and you can see some of them in this 2-part YouTube slideshow here and here. We thought we were in for a spot of bother while descending the steepest part of Porlock Hill when a large, modern coach swung round the bend at the foot of the 1-in-4 section. Fortunately there was enough room for both vehicles to pass. It would have been a different story further up the hill!

After the final trip had been run we headed back to the garage at Bishops Lydeard. Unless they’re needed for private hire jobs, VDV752 and VDV753 will be stored for the winter along with the rest of the active heritage fleet. Some badly needed maintenance will also be done over the winter including (hopefully…)  the replacement of the top deck floors which are badly worn and have leaked in heavy weather for several years.

If my plans come to fruition, by the time the Service 400 runs again next May I will have passed my PCV practical test and will be passed as a driver on the Exmoor route. I will of course post news of any developments here, along with the occasional dip into my photo archives.