As I mentioned in my last post, my driver at the Exeter event took many photographs between journeys. He has sent me one of the best, taken outside Exeter St Davids Station during a layover. Our bus, Guy Arab IV TFJ808, is almost full with passengers wanting to return to the bus station and a similar Guy Arab (although with Park Royal bodywork) has just drawn up behind.

The lighting conditions outside the station were particularly helpful, providing a nice white light as opposed to the orange hue normally cast by the sodium street lights in most other places. Photographer Ken Jones has an excellent set of photos on the Focus Transport website.

I heard yesterday that a total of £380 was raised for the NSPCC during Sunday night’s event. If you were there and popped a donation into one of the collecting boxes, thank you!

If you had been at the departure end of Exeter Bus Station yesterday evening you would have thought you’d slipped through a time warp. Lined up in the departure bays was a selection of buses from the 1950s and 60s. Nearly all had run on city services and had been gathered to mark 40 years since the disppearance of the green and cream ‘City of Exeter’ buses from the streets. 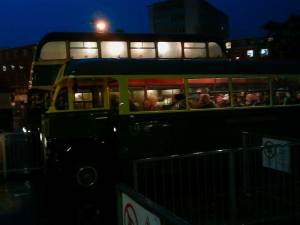 The event was run by a team headed up by Daniel Shears, whose illustrious father Colin has built up a large collection of buses with a westcountry connection on the old airfield at Winkleigh. I was conducting on one of Dan’s own buses, a 1956 Guy Arab IV with Massey bodywork.

Unfortunately the weather was not kind for much of the late afternoon and evening and those who gathered at the bus station waiting for the first departures at 16:30 had to shelter under cover. My first turn wasn’t until 17:50 so I stood and watched proceedings from the sidelines. Fortunately I was well dressed for the weather, having thermals underneath my full winter uniform and heavy overcoat!

END_OF_DOCUMENT_TOKEN_TO_BE_REPLACED

Some people say “don’t volunteer for anything” but I’ve learned that life is full of give and take, so I’ve volunteered to do a conducting turn this weekend.

It’s 40 years since Exeter Corporation ran buses. Their familiar green and cream fleet was absorbed into the National Bus Company and wore (briefly) Devon General colours followed by NBC Poppy Red. Earlier this year WHOTT organised a commemorative get together of some preserved Exeter Corporation buses at Exeter Coach Station and this Sunday there will be a Night Running Event. The organisers hope to gather as many former Exeter buses together as possible to offer free rides around familiar city routes. Starting at 4pm and running through the evening until about 9.30pm, Leylands of several varieties, Guy Arabs and maybe a Daimler or two will operate from Exeter Bus Station for a nostalgic evening of bygone bus travel, lit by tungsten bulbs.

I’ve offered my services as a conductor and have been rostered on Guy Arab IV TFJ 808. I always remember these buses from the 1960s and 70s as being the most ‘musical’ of the Exeter buses (not including the Devon General AEC Regents that shared some of the city routes) with their crash gearboxes. I lived in Exmouth back then and these buses would sometimes turn up on the Exeter-Exmouth service or sometimes on school services outside the comprehensive school in Green Close.

By the look of the weather forecast I will have to be dressed in my winter uniform and thermal long-johns!

Yesterday I went to Exeter for another driver assessment session, this time with Steve Robertson Training Services in Pinhoe. It very nearly didn’t happen though.

I arrived in good time and introduced myself. Unfortunately they didn’t have me down in their diary. Not only that but the coach instructor had just left after bringing a candidate back from their test. I got the chap in the office to check their emails and then they realised they’d made an error because my appointment had been confirmed some time ago. The instructor was hastily recalled and apologies were made.

After a short delay I met the instructor who was the boss of the company. I gave him a brief summary of my experience so far as we walked to the coach. Steve Robertson shares some facilities with Hookways Coaches, including one of their many coaches for training purposes. I was given a guided tour of the ‘cab’ before we set off out of town towards a quiet road where I would take over. I was very pleased to see that the coach had a normal 6-speed manual gearbox and didn’t feature a 2-speed rear axle. This was something that complicated matters for me the last time I had a driver assessment session – the coach we used then had 10 gears to play with!