Yesterday I went to Exeter for another driver assessment session, this time with Steve Robertson Training Services in Pinhoe. It very nearly didn’t happen though. 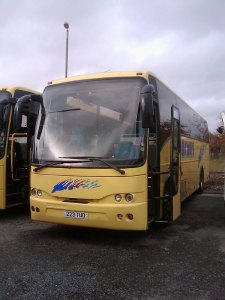 I arrived in good time and introduced myself. Unfortunately they didn’t have me down in their diary. Not only that but the coach instructor had just left after bringing a candidate back from their test. I got the chap in the office to check their emails and then they realised they’d made an error because my appointment had been confirmed some time ago. The instructor was hastily recalled and apologies were made.

After a short delay I met the instructor who was the boss of the company. I gave him a brief summary of my experience so far as we walked to the coach. Steve Robertson shares some facilities with Hookways Coaches, including one of their many coaches for training purposes. I was given a guided tour of the ‘cab’ before we set off out of town towards a quiet road where I would take over. I was very pleased to see that the coach had a normal 6-speed manual gearbox and didn’t feature a 2-speed rear axle. This was something that complicated matters for me the last time I had a driver assessment session – the coach we used then had 10 gears to play with!

We stopped in a layby near the threshold of Exeter Airport’s main runway, on the old A30 to Honiton. I took time to have a ‘dry run’ with the gearbox before I started the engine. I learned a new mnemonic before setting off: ‘GOSH’, which stands for Gears, Observe, Shoulder, Handbrake. The importance of using both mirrors and looking over my shoulder before pulling away was emphasised as I would fail my test instantly if I neglected to look around before moving off.

And so we started away. I think my instructor thought I was rather over-confident and told me to slow down and become familiar with the vehicle. Good advice, really. Part of me wanted to show him that I knew what I was doing but he quite rightly put safety first.

We were out for about an hour and in that time I had driven on a reasonably easy A-road, a narrow country road and a dual carriageway. Add to that some roundabouts, traffic light junctions and some reversing at the end to park the vehicle and the instructor had a good impression of my level of experience. At the end he was very pleased. “That was a bl**dy good drive!” He said that I would have no trouble passing the PCV test and thought that it would take 4 days of intensive training, rather than the usual 5.

I left feeling very positive, knowing that with my aptitude for driving and an excellent instructor to guide me I would more than likely pass first time. I certainly hope so, because the test fee alone is £115!

Coach driving courses at SRTS are booked up for most of the remainder of 2010 so it will be January or February next year before my turn comes.