It’s about time I mentioned my first attempt at driving a bus. This occurred 25 years ago, in April 1985. I was at that time working for the Express & Echo, the evening newspaper for the Exeter area. Their offices and printing plant were then in Sidwell Street and my office was at the back of the building. As I was shown to my new graphic design studio I was rather pleased to see that it provided an excellent view of the bus station. However, I was careful to conceal my pleasure at this discovery because I was being paid to design advertisements, not watch buses!

Not long after I started work there Harry Blundred, who was Managing Director of Devon General then, began to introduce his revolutionary fleet of minibuses. These were to replace the remaining Bristol VRs, Leyland Atlanteans, Olympians and other assorted remnants from the erstwhile Exeter Corporation, Devon General and Western National fleets he had inherited.

However, I was much more interested in his driver training vehicle. This was a yellow ex-Hants & Dorset Bristol FS6G 5675EL, fleet number TV2. After seeing most other rear entrance half cab buses ousted by front entrance, rear engined vehicles, I was pleased to see (and hear) this survivor plodding up the hill into the bus station. The fact that it was an ex-H&D bus made it significant because it was possible that I’d seen it in service in former years in either Salisbury or Southampton. I fancied having a go in the old Lodekka before it too was consigned to the scrap heap. 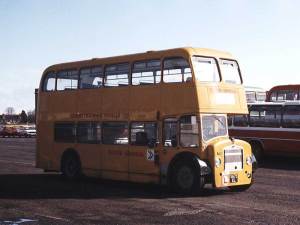 People often say “if you don’t ask, you don’t get” so I duly wrote to Harry Blundred on the pretext of congratulating him on his bold initiative of bringing in a high frequency minibus service. In reality I thought they were awful. Often derided as ‘converted bread vans’, they were noisy and cramped. History though tells a different story and the minibus revolution was so successful in Exeter that it spread to other areas. Those original minibuses of course are life-expired now but a few are enjoying retirement in private hands. This one is from the first batch and is now in the care of WHOTT.

I was delighted to receive a reply from Mr Blundred inviting me to meet him in his office where we could talk over the possibilities of driving TV2. I went and saw him one day in my lunch hour and he said that he could arrange for me to have some lessons with his Chief Driving Instructor. Not only that, but he could train me to PSV* test standard if I wanted, although it would be up to me to put myself through the test as I wasn’t a Devon General employee. Understandably, I was delighted and couldn’t wait to get started. I was introduced to Bill Porter, who was the aforementioned Instructor.

So it was that, one Saturday morning in April 1985, I arrived at Exeter Coach Station where TV2 stood waiting. Bill was sitting on one of the rear bench seats smoking his pipe. He’d been told about my interest in this particular vehicle so he took me upstairs to show me how they had adapted it for use as a training vehicle. Some of the seats on the top deck had been removed and others had been turned around 180 degrees. Tables had been fitted between the seats that now faced each other and on the tables were mounting plates for Timtronic ticket machines, which were then fairly new. This ‘classroom’ was used to train new drivers on the use of the ticket machines.

On the lower deck, the front forward-facing seat behind the cab had been taken out and a tall stool mounted in its place. Beside the stool a huge lever protruded through the floor. This was used by the instructor to apply the brakes in an emergency situation, i.e. when the student driver was about to hit something. Bill only used it once while I was driving, but we’ll come to that later!

He sat me down and we talked through some safety procedures and theory topics before climbing through the gap that used to be the window behind the driver’s seat. After giving me strict instructions to watch all that he was doing, Bill drove us down to the Marsh Barton trading estate where he would begin my first bus driving lesson.

4 comments on “PSV driver training with Devon General on 5675EL”