So what can be done to revive the fortunes of service 400, the ‘Exmoor Explorer’?

I’ve been conducting on the service 400 open top tour for about half of its existence and in that time I’ve seen a slow decline in passenger numbers. I don’t know its early history but I believe it started as a minibus service, running one round trip per operating day. At the peak of its popularity there were three departures per day, using 2 open top Bristol Lodekka buses but this proved too costly to sustain and a two-trip format has been in place for the past 7 years.

In all that time, the service was supported financially by Somerset County Council (SCC) to the extent that Quantock Motor Services, as the contracted operator, was being paid a set amount to provide the service. This being the case, SCC took responsibility for promoting the service. The Council designed and printed attractive timetable leaflets which were distributed around the Minehead area and carried on board the buses to cater for passing enquirers. Timetables were also posted on all the bus stops around the route and a dedicated page was maintained on the SCC website. There may also have been other forms of marketing that I’m not aware of.

Now that SCC has withdrawn funding from the route, their only contribution is to print a limited number of leaflets and maintain the Service 400 web page. The service now has to support itself as a commercial venture and depends on good loadings to generate sufficient revenue. Unfortunately there isn’t a great deal of expertise within the company when it comes to marketing and promotion. The QMS website hasn’t even been updated since May and I get the impression that there isn’t the will to make the 400 successful again.

If I had the chance, there are a number of things I would do in an effort to drive passenger numbers up:

Press advertising
Probably the costliest form of promotion but, done correctly, can work well. I’ve worked in advertising for more than 20 years and it’s clear that an effective strategy includes regular insertions, well designed ads and a careful choice of media.

Online advertising
Paid-for advertising is also worth considering. Tourism-related websites, particularly those promoting the Exmoor locality, will often have prominent banner ads at the top of the page.

Other online marketing
There are plenty of ways to promote the 400 online without spending anything. Several of the villages we pass through have their own websites and the 400 could be listed there as an attraction. Much could be made of the company’s own website which, as I said earlier, isn’t maintained regularly. Although I’m the webmaster for the site, I can only upload information if it is given to me! Many travel and tourism sites have comment facilities (like this blog) and these can be useful in raising the profile of the 400. Social media (Facebook, Twitter etc) can also be used effectively as long as they are updated often with informative and compelling posts. The interweb is a huge opportunity and there are many more ways to promote the 400 that I can’t mention here.

Bus stop timetables
In previous years SCC took care of the Service 400 timetables at each bus stop on the route. I didn’t check, but one of the drivers told me that none of the timetables had been updated since last year, if indeed they were present at all. A surprising number of people use the 400 to travel to and from intermediate stops but, without current timetables displayed at the stops, intending travellers won’t know when to catch the bus. There’s a wooden bus shelter at Exford with space to put up a poster as well. Another missed opportunity.

Poster board
For a couple of years we used a wooden board, about A1 size, on which was fixed a laminated poster. This gave information about the 400, 300 and 39 routes with fares and departure times. We would chain it to the bus stop post on Minehead seafront so that passers by could see it when we were out on each trip. It wasn’t updated or used this year but I think it’s another effective way to grab passing trade. 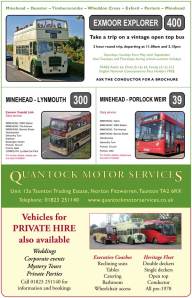 Pre-season outing
Another initiative that could be run again is the pre-season outing. I’ve only done this once but it was a special ‘Exmoor Explorer’ trip for invited guests, one weekday in April. It was intended to act as a taster for hoteliers, guest house owners and others involved in the tourist trade locally. I think it was masterminded by the person at SCC who was responsible for the Service 400 but it could easily be organised again with a bit of forward planning.

Editorial
There are many publications that target the tourism market, from glossy magazines like Somerset Life to free tourist newspapers. A feature writer could be invited to sample the delights of the ‘Exmoor Explorer’ on a suitably sunny day early in the season. Even if they couldn’t send a writer or reporter, an editorial piece could still be written and submitted to them. A set of well composed photos could accompany the piece, taken with a decent camera. As part of the 400 route passes through Exmoor National Park, the same material could be submitted to the park authority website and the National Trust magazine.

There could of course be many other ways of raising the profile of the 400 but it’s all too late now. There is very little chance of the service running next year as revenue from this season appears to have been scarce. Perhaps I should have seen this coming and suggested these ideas 12 months ago.