Last weekend was unusual for several reasons. Firstly, I spent a day in uniform but didn’t do any conducting or driving. Secondly, I wrote off a car in an accident but more of that later. I was invited to help promote the reborn Crosville Motor Services at a Wedding Fair in Bristol. 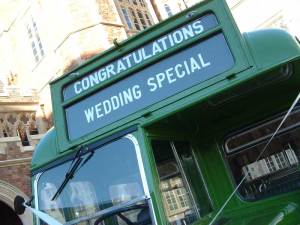 Accompanied by the proud owner of this fine vehicle and a member of his family, I travelled up to Clifton College, Bristol where the Wedding Fair was to take place. The weather was perfect and the autumn colours were vibrant as we made our stately progress along the A370 from Weston-super-Mare. It was almost a convoy of vintage buses that morning because another three Bristols had left the garage just ahead of us, a Bristol KSW6B, a Bristol LD6G and an ex-New Zealand Bristol RE. They were all heading for a rally in Brislington, their birthplace.

We had a small stand in the exhibition, which was organised by the South West Wedding Guild. The beautiful banquet hall, with its high vaulted ceiling, was the location for the Fair which provided a showcase for everything you could possibly need for a wedding. As long as you had plenty of the folding stuff, of course.

Cake makers, flower arrangers, photographers, DJs, vintage cars, a string quartet and a toastmaster were among the exhibitors. The event was well attended, with many potential customers milling around. I spent some time in the hall handing out leaflets and describing some of the benefits of hiring a vintage bus for a wedding. My main reason for going along was to see if I could offer any marketing advice so that CMS can attend further fairs and trade shows next year with professionally designed literature and stand graphics.

I also spent some time outside in the courtyard where the ex-Crosville Bristol L5G stood in its wedding finery alongside a variety of vintage and not-so-vintage cars. The single decker was there to represent the CMS heritage fleet, which is still growing. By next year, customers will be able to choose from a wide range of vehicles for their wedding including several Bristol Lodekkas, an open top Bristol VRT and even a London RM and an RT! The wisdom of bringing such a well presented vehicle paid dividends as several bookings were made for next year, along with many enquiries. Armed with my camera, I wandered round taking a few artistic shots for promotional purposes. 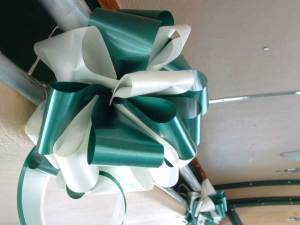 Having spent most of the day on my feet I was glad when it was time to pack up and head back to the garage. I sat in the best seat in the house, at the front with a view over that classic bonnet and gleaming black wing. It’s a combination that is very similar to a 1920s motor car, a style that continued on buses right up to the 1960s when the last Leyland PD2s were supplied to a number of traditionally-minded Corporations. The ride was superb, a noticeable lack of rattles allowed the classic sounds of the 5-cylinder Gardner and crash gearbox to delight the ear. The driving was equally superb as always. Jonathan Pratt takes great pride in handling his heritage vehicles with care and skill.

The bus was parked in a huge new garage which is being fitted out for maintenance and storage of the CMS running fleet,  modern coaches and buses as well as some privately owned heritage buses.

All that remained was for me to drive back to Bristol, where I had been visiting relatives. The M5 northbound was extremely busy, with progress limited to around 50mph most of the way. Unfortunately I was caught in a 4-car shunt at the M5/M4 interchange at Almondsbury. Mercifully I was unhurt but the car is a write-off.

5 comments on “Wedding Fair with a Crosville Bristol L5G”