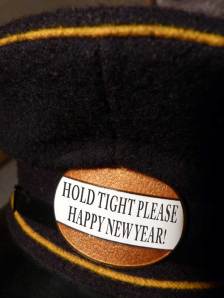 So another year ends. Where does the time go to? It seems an appropriate time to reflect on 2011, a relatively dry year for me in terms of bus activity.

With just one wedding duty for Quantock Motor Services and only four ‘Exmoor Explorer’ duties in the shortened summer season, this has been a year of few opportunities to see any action in my favourite pastime. You will have read of the probable demise of the Service 400 route around Exmoor in some of my earlier posts. I still don’t know what will happen next year with QMS, if anything.

I didn’t even get involved with the Exeter Nocturnal Running Event this year. I conducted on an ex-City of Exeter Guy Arab IV for the 2010 event, which was held on a bitterly cold November evening. This year’s event seems to have been successful again so maybe I’ll offer my services for 2012. Dan Shears, are you listening?!

I almost got as far as taking my PCV test but backed out on the day before the test due to a change of location (Plymouth). I’m planning to enrol on a course in Exeter in February.

An interesting development this year has been the launch of a new bus/coach company in Weston-super-mare, using the trading name ‘Crosville Motor Services‘. Headed up by Jon Pratt,  this ambitious outfit has several facets to its business. As well as modern executive coach hire, they run free supermarket buses, rail replacement services and of course heritage bus hire.

In this instance, they seem to have cornered the market in green buses – their garage is full of them! Some of Dr Mike Walker’s collection shares a spacious depot with the CMS heritage fleet, which contains examples from Crosville, Hants & Dorset, Southern Vectis and Bristol Omnibus. They are all Bristol chassis, with K, L, LD, FS, FLF and VR marques represented, sometimes by more than one example. Further additions are expected in 2012.

There are exciting plans in the pipeline for CMS, not just wedding hire outings, although they are interesting enough. In addition to a running day on August 26th, there are also plans to run heritage buses, on selected days, on regular routes normally served by modern buses.

If there is a down side to all of this, it’s the fact that Weston-super-mare is even further away from Paignton than Bishops Lydeard is! Every time I agree to do a turn for CMS, I have to factor in a costly (in terms of both time and fuel) journey as well.

So, whether you’re an armchair enthusiast, an active participant or working full time in the transport industry, I wish you all a very happy new year. Thanks for reading and I hope to meet up with some of you during 2012. Cheers!