It’s your turn, dear reader, to help me with some information. Does anyone know if there are any companies/museums/individuals who have the machinery to print new rolls for Setright Speed ticket machines? The tickets look like this when issued:

These are just a couple of examples of Setright tickets from west country operators. The Western National tickets are probably from the 1960s or early 70s and the Wilts & Dorset ones are from the de-regulated ‘Wilts & Dorset Bus Company’ rather than the older ‘Wilts & Dorset Motor Services Ltd’. I have a number of these rolls and the ticket strip shown here was issued from my own machine only yesterday!

I am already aware of Keith Edmondson’s http://www.ticketrolls.co.uk website and have dealt with his company before but are there any others around who still have the equipment on which to print fresh rolls? Please leave a comment if you can help. Thank you!

I’ve dipped into my Wilts & Dorset photo collection again and have pulled out one or two unusual vehicles.

Like many other operators at the time, Wilts & Dorset acquired ex-military recovery vehicles to rescue broken down or accident-damaged members of the fleet. This one is an AEC Matador recovering what could be a Bristol LS saloon from Romsey town centre. Like most of the ex-military recovery vehicles in bus fleets, this one has been re-bodied, probably in the company’s own workshops, to re-fit it for it’s new task. 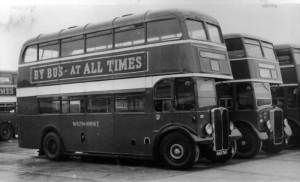 Before the standardisation of the nationalised Wilts & Dorset fleet, a wide variety of vehicles were operated. Some, like this AEC Regent II, were absorbed from Venture. Before that, it ran in the Cheltenham & District fleet and before that, Newbury & District.

END_OF_DOCUMENT_TOKEN_TO_BE_REPLACED

Working as a conductor on the platform of a rear-loading heritage bus can leave you aching and tired at the end of the day. Bracing yourself against a pole or a seat as the bus makes its lurching, bouncing progress uses up a surprising amount of energy. Especially when you add in several trips up and down the stairs while taking fares and attending to passengers.

But did you know that driving one of these historic gems can be even more strenuous for the guy at the noisy end? It can, believe me. Especially if your bus has soft tyres. Take my advice, don’t take one out unless it has fully inflated tyres! I will explain a little later.

Yesterday I was helping Crosville Motor Services staff to promote their private hire vehicles at a wedding fair near Congresbury, Bristol. The day-long event, at the Cadbury House Hotel at Frost Hill, was similar to the one I attended last October at Clifton College, Bristol. Businesses which provide all manner of products and services for weddings present their wares at these shows, which are open to anyone involved in planning a wedding. There’s everything from wedding gowns to videographers. Including vintage bus hire, of course. 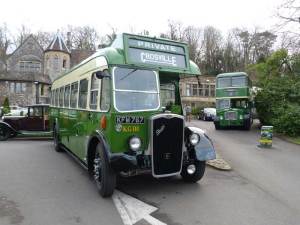 We took two vehicles from the Crosville fleet, a single deck Bristol L5G from the original Crosville company in north Wales and a double deck Bristol FS6G (Lodekka) originally from Southern Vectis on the Isle of Wight. I was invited to drive the latter vehicle to and from the wedding fair venue, a distance of about 9 miles each way. The Lodekka is one of several similar vehicles available for hire in 2012, most of which are more than 50 years old. This one is very smart and, together with the immaculate Bristol L, makes a fine mobile advertisement for the company.

I was advised before I climbed into the cab that the front tyres were a little soft but that wouldn’t be a problem unless I was going slowly. I soon discovered what a difference under-inflated tyres can make to the effort required to take a corner. The first turn I had to make was right after leaving the garage as I headed for the main road. I’m no stranger to Lodekkas, as regular readers will know, but all of a sudden I felt myself running out of road as I tried to make a left turn. The steering on these buses is normally quite heavy at slow speed (there’s no power steering) but this was unusually heavy. Do you remember the weedy little guy who used to advertise the Mr Muscle cleaning products on TV? I felt just like him!

END_OF_DOCUMENT_TOKEN_TO_BE_REPLACED

This weekend I am due to attend another wedding fair, this time representing Crosville Motor Services at the Cadbury House Hotel. It’s a sumptous country hotel near Weston-super-mare owned by the Hilton group and the wedding fair is organised by the South West Wedding Guild.

As there is a large parking area available for exhibitors, we are planning to take three buses. Each one represents a different decade of bus history. Assuming all are fit to run, we will take KFM767 (ex-Crosville, 1950), YDL318 (ex-Southern Vectis, 1962) and LEU263P (ex-Bristol Omnibus, 1975). I’ve put my name down to travel with the Southern Vectis Lodekka and, if I play my cards right, I might even get to drive it too!

It promises to be a very busy day and I’m hoping that our new promotional slideshow will draw potential customers to our stand.