I’ve dipped into my Wilts & Dorset photo collection again and have pulled out one or two unusual vehicles. 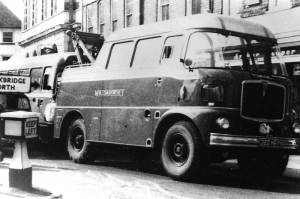 Like many other operators at the time, Wilts & Dorset acquired ex-military recovery vehicles to rescue broken down or accident-damaged members of the fleet. This one is an AEC Matador recovering what could be a Bristol LS saloon from Romsey town centre. Like most of the ex-military recovery vehicles in bus fleets, this one has been re-bodied, probably in the company’s own workshops, to re-fit it for it’s new task.

Before the standardisation of the nationalised Wilts & Dorset fleet, a wide variety of vehicles were operated. Some, like this AEC Regent II, were absorbed from Venture. Before that, it ran in the Cheltenham & District fleet and before that, Newbury & District. 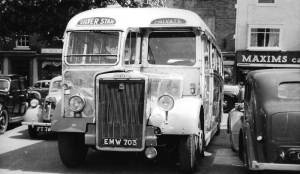 EMW703 was a Leyland Tiger PS1/1, new in 1948 to Silver Star. This relatively small company was based in Salisbury and ran a very varied fleet. From new, this batch was unpainted and, for a few years anyway, sparkled with its polished metal finish. The fleetname on the bodyside would have been applied with copper leaf. This very attractive scheme would soon disappear under a painted version of the silver livery as the effort of keeping the bodies polished became too time-consuming.

A number of the 1954 batch of Bristol LWL5G saloons were rebuilt to FB39F configuration by Wilts & Dorset for one man operation on country routes. They were fitted with these distinctive fibreglass full-fronts, which I just about remember seeing as they headed out of Salisbury towards Wilton and beyond. Some of the Hants & Dorset Bristol Ls were similarly rebuilt. The picture below shows sister vehicle LAM108 with its original ECW B39R body.

Another unusual front end is carried by this 1955 Bristol LD6B. The early batches of Lodekkas were supplied to the Tilling fleets with these full depth radiator grilles. Subsequent batches were fitted with the more familiar (and more attractive, in my opinion) shorter grille. The early batches were given the later design of cowl when they came in for servicing, so the full depth design didn’t last long. As a small boy I can remember seeing these in Salisbury, where this one is pictured pulliing in to the bus stop outside the Style & Gerrish department store in the Blue Boar Row. Just behind the Lodekka is a Leyland PD1 of the Silver Star fleet. You can just see the trademark ‘star’ logo through the back windows of the Bristol.

Finally, for this post anyway, a view of another non-Bristol member of the Wilts & Dorset fleet. In the 1960s and 70s W&D ran quite a large fleet of coaches, including a few Bedford VAL70 coaches, with Duple C49F bodies. These twin-steer coaches will of course be forever associated with the classic film “The Italian Job”!

Next time we’ll look at some lucky survivors from the Wilts & Dorset and Silver Star fleets.