So, at last I can write about a bus that isn’t a Lodekka. Well OK, so it’s still a Bristol but I’m sure I’ll find a Leyland or an AEC to drive one day! 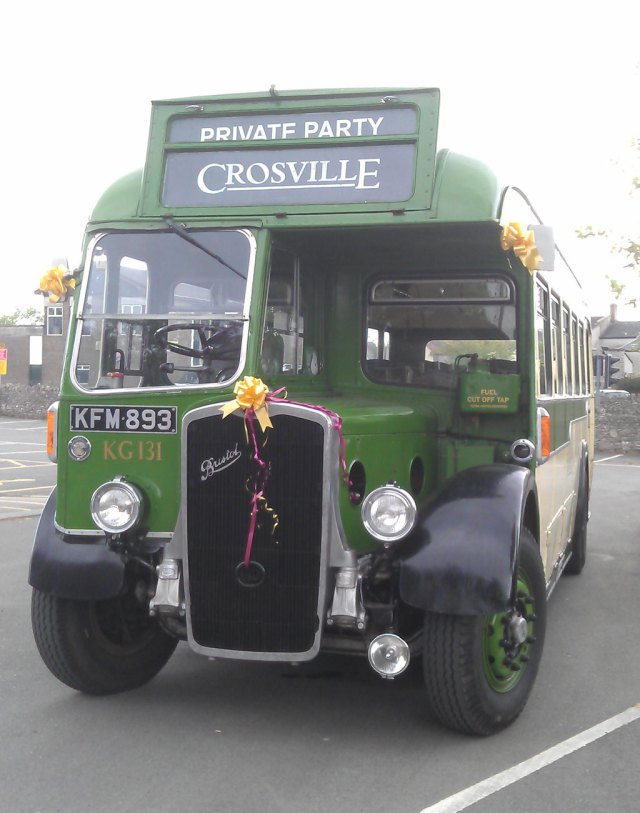 My first driving duty with a Bristol L went reasonably well, considering that I hadn’t received any ‘type training’ or practise beforehand. The job involved taking a recently-acquired Crosville Bristol L5G to East Somerset for a private hire job. I had thought it was to be a wedding but it turned out to be a ‘civil partnership’ ceremony. I arrived from Paignton in time to chat to a gentleman who is restoring an ex-Crosville AEC Matador recovery vehicle. I may write about this fascinating machine another time.

My first impression, on climbing into the cab of the Bristol L, was that it was rather cramped. Compared to some of the Lodekkas I’ve driven, the driver’s seat is very close to the pedals even though it is as far back as it can go. I’m a small bloke with short legs – I wondered how long-legged chaps get on!

A friendly colleague in the garage showed me how to operate the ‘cold start’ button which, on a Bristol L with a narrow bonnet, is easy. You just reach through one of the two large holes in the bonnet side sheet and lift up a button under the injection rack! With the button duly pressed and my exterior checks completed, the engine started first time.

This time I brought Mrs Busman-John with me. She had volunteered to decorate the bus with gold and burgundy ribbons, which were the colours chosen by the customer. We added some flowers and balloons of our own just for good measure.

Having once again studied Google Maps to figure out the best route, we set off following my memorised plan through many lovely Somerset villages. These included Westbury-sub-Mendip and Cheddar (of Cheddar Cheese fame). Some of the roads were fairly narrow and certainly twisty, giving me good practice with driving the Bristol L for the first time.

I found that, for a bus that was built in 1950, it handled reasonably well. The steering was considerably lighter than the Bristol FLF I’d driven on my last trip out! Gear changes (going up the box anyway) were really positive, with no signs of free play in the linkages. I soon decided however that this old bus was far less forgiving than a Lodekka (which isn’t easy itself) because changing down was a lot harder to do smoothly.

First of all I noticed that the gear ratios were wider than those on the Lodekkas. For instance, going up from 3rd gear at full revs the engine had to die down to almost idle speed to reach the revs required for 4th. But even after taking account of that when changing down again, I still made a hash of it. Nasty grinding noises indicated that either I’d got the revs all wrong or stuff was spinning in the box that shouldn’t be. There’s a clue there.

We rumbled on through the Somerset countryside, passing Wells and Shepton Mallet where I would return with my load of passengers later. The Bristol L is fitted with an overdrive gearbox. ‘5th gear’, as it is sometimes called, is reached through a separate gate next to 4th gear, a layout with which I am familiar having met it before in several Lodekkas. With this benefit, we were able to bowl along at 45mph as long as the road was flat or downhill!

In Shepton Mallet I dropped off my wife, as she was visiting relatives nearby while I was carrying passengers. Leaving Shepton I drove on down the A371 towards Wincanton, passing Castle Cary on the way. The road turns sharply there as it is carried over the main railway line to London on an overbridge. That bridge would later provide the most embarrassing moment of my day.

I arrived at the pickup point, a cottage just outside Wincanton, about 10 minutes early so I left the indicator on and watched for traffic passing the stationary bus on the narrow road. Fortunately it wasn’t busy. Eventually the bus filled with guests, with two front seats occupied by the bride and what I assumed was her chief bridesmaid. After turning round in a nearby farm entrance (what a delight not to have to struggle with heavy steering!) I drove back up to Shepton Mallet with my heavy load. There were times when I could have done with an extra cylinder – five of them aren’t enough with a full bus! Then we met the bridge at Castle Cary. The sharp bend required me to slow right down but, once again, I fluffed the downchange from 4th to 3rd. I rapidly gave that a miss and tried to engage 2nd. That appeared to be missing from the ‘box altogether. Having virtually coasted round the sharp bend I bit the bullet and braked to a stop, engaged 2nd and pulled away again. Extremely embarrassing.

Just before Shepton Mallet there is quite a steep hill where the road passes through the village of Prestleigh. I’m sure I heard a cheer from behind me as I successfully engaged 3rd gear for the climb! The wedding party was due to be taken to the Registry Office in Shepton Mallet which is accessed through the town’s main Pay and Display Car Park. I had been dreading this part, as it involved a tight turn straight after the car park entrance which would be made worse if the car park was anything like full. I stole a glance at it earlier as we passed through Shepton and was pleased to see that (at that time, at least) it was relatively empty. Arriving with my passengers, I was relieved to find that it was still nearly empty, allowing me plenty of room to swing round into the car park.

Everyone left and disappeared into a nearby building. I checked out my exit route before I sat down at the back of the bus and ate my lunch.

The ceremony over, the happy couple and the guests returned and it dawned on me then why there was a significant absence of men. The happy couple were both women as well. Not letting my personal opinions affect my professional duties I congratulated them both cheerily and welcomed them back aboard! We trundled back down the road towards Wincanton but turned off and headed for Shepton Montague. I had earlier planned not to use the shortest route as it was a very narrow lane and opted for the next road, which was wider. A passenger opened the sliding window behind me and said, “Umm, shouldn’t you have turned right, back there?” I shook my head, “no, it’s too narrow for this bus. I’m going for the next turning”. Fine, except that it was a very acute angled junction, not angled in my favour I might add. I tried to take it as wide as I could and threw on as much lock as I could but ran out of road. Another embarrassing moment. Thankfully, one of the passengers saw my plight and knew what I was going to do next so he opened the back door, leapt off and held the traffic while I reversed for another try. I waited while he climbed back on and shut the door. He pressed the buzzer and we were off once more. He only gave one buzz but I’ll forgive him for not knowing the proper code!

Soon we pulled up outside the Montague Inn where the same helpful bloke jumped off and helped me reverse into the car park. Normally a conductor would do this for me but this was a solo trip. Sadly I didn’t get the chance to thank him because, as soon as I got out of the cab I was grabbed by the photographer to pose with the happy couple in front of the bus. Then, before I knew it, one of them climbed up into the cab – complete with long dress – and grabbed the steering wheel. She assured me that she wouldn’t touch anything vital. Which was just as well because the engine was still running!

They were very grateful for all I’d done, which was nice but I really didn’t feel that I deserved it after the gearbox episode. In a way I was glad to be alone on the bus again because I spent the return journey to Shepton trying to solve the mystery of downchanging. The search for the answer would take me almost back to Weston-super-Mare.

My final stop was in Shepton Mallet again, to give my eldest son and his family (who my wife had been visiting) a short ride. Having drivers’ blood in his veins he couldn’t leave without trying the Bristol L cab for size! 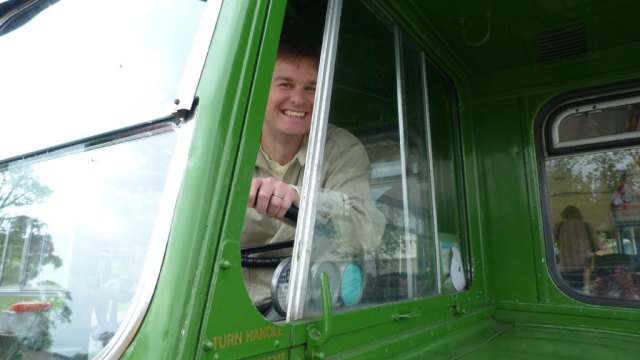 Soon afterwards I was on my way again. With time to think about the day, it suddenly occurred to me why I’d had so much trouble with changing down the gears. Once or twice, while climbing a hill with falling speed and anticipating a downchange, I had rested my left foot on the clutch pedal. Alarmingly, the clutch had begun to slip almost immediately so I had lifted my foot right off the pedal in short order. I knew that the ‘bite zone’ (if there is such a term) was at the high end of the clutch pedal travel but these ‘slips’ confirmed it. Now I wondered if my problem was due to me not lifting the clutch pedal far enough while double-declutching. Next time I needed to go down from 4th to 3rd I tried lifting my foot right off the pedal while the gear lever was in neutral and I was raising the revs. Guess what? It slid into 3rd without a whisper. I tried it again on the approach to a roundabout using the same ‘foot right off’ technique, going from 4th to 3rd and down to 2nd. Sorted. By the time I was driving back into the depot, I could change right down (I had to because of some viscious new speed humps) without any crashes or grinding. How frustrating! If only I had discovered this on the outward empty journey!

15 comments on “Exploring Somerset with a Bristol L5G”