I thought that 50mph was slow amid 21st century traffic but that was before I’d sampled 30mph max! My usual bus, a Bristol FLF with a 5-speed manual box, has a top speed of about 53mph but today I had a different Lodekka which only has a 4-speed box. Not only that but it’s fitted with a low ratio rear axle, which means that top speed is only 30mph, occasionally 33mph on a good downhill stretch! 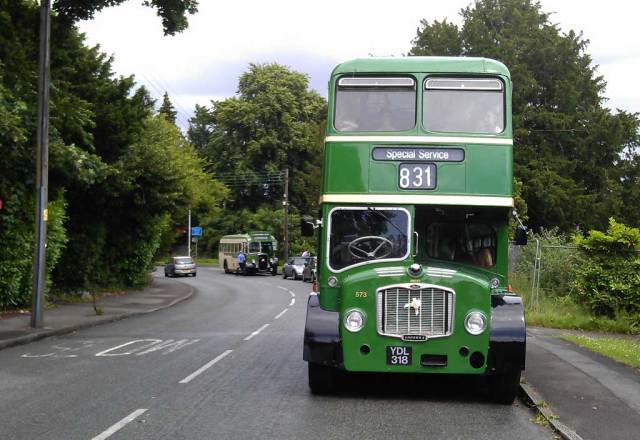 To start with, I was going to conduct and my colleague Paul (who used to be a driver for Hants & Dorset) was going to drive but, after discussions, he drove the Crosville Bristol L seen in the distance of the picture above while I drove the Lodekka. Thank you Paul!

Our pickup point was Burwalls, just at the southern end of the Clifton Suspension Bridge in Bristol. The journey up from Weston gave me a chance to get accustomed to the Southern Vectis Bristol FS6G, which I had only driven once before. Despite both being Lodekkas fitted with the ubiquitous Gardner 6LW, the difference between this bus and the FLF which I usually drive was quite noticeable. To start with, the engine sounded quieter and not as harsh and rattly as the FLF’s. As we drove up the A370 towards Bristol I noted that there were far fewer rattles and vibrations in the cab. The steering seemed to be much tighter for a start, with much less free play. The other, most obvious difference between the two buses is the difference in top speeds, as I mentioned earlier. 30mph is fine in town or for climbing hills on the Isle of Wight but hopeless when out on the open road on the mainland where there are considerable distances to cover. I was very aware of the massive tailbacks that built up very quickly behind me and several times I pulled over into bus stop laybys to let the traffic go by.

You may have noticed in the photograph above that this Lodekka has a white steering wheel. I’m not sure if this would have been fitted from new but it usually alerted the driver to the fact that he was driving an 8ft wide bus. I believe this was introduced on the Bristol KSWs, as the previous Bristol Ks were 7ft 6in wide. Whether or not that’s true, the white plastic covering was in excellent condition and made driving even more pleasant. The covering on the FLF I’m used to driving is cracked and broken in places which means it’s rather rough on my hands!

We were unable to approach Burwalls from the Bristol direction because of the 4 ton weight restriction on the suspension bridge so we crawled up the hill towards Leigh Woods and then turned right opposite the grand entrance to Ashton Court. This involved a very tight right-hand turn because the junction is oblique, not helped by traffic bollards in the centre of the road and railings on the opposite side. Paul, having arrived ahead of me in the (slightly) faster Bristol L, had decided that discretion was the better part of valour and pressed on up the hill to find somewhere to turn and approach the junction from the other direction. Being a novice, I sized up the junction from the cab and decided that it was just do-able. The lights turned to green as I drew up to them and I swung round in 2nd gear. Unfortunately I didn’t have enough time to get full lock on and my front nearside wheel nearly had a coming together with the railings. If ever there was a time to swear, this was it. After checking my mirrors and looking back through the empty bus, I reversed a few yards and had another go. Sometimes you have to learn the hard way!

We turned our buses at a junction near the bridge and waited for the wedding guests to load. 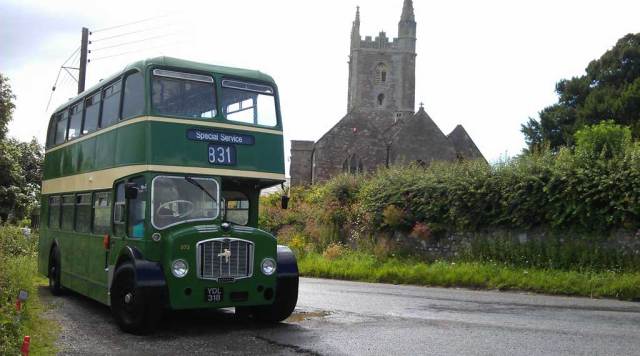 The journey to the small church at Tickenham was straightforward, thankfully. In England we tend to downplay our descriptions of the weather. Today we would describe it as ‘changeable’. In other words, full sun swiftly followed by a downpour with perhaps some drizzle and gusty wind thrown in for good measure. Taking advantage of a dry spell, Paul and I turned our buses at a junction that was behind me as I took the photograph above. The break in the weather didn’t last long and we got rather wet before the exercise was complete.

We ate our lunch during a rest period and eventually the bells began to ring out from the church tower, signifying that the knot had been tied within. The buses filled up again, with the Lodekka’s top deck favoured by the fitter adults and all the children, several of whom took great delight in pressing the buzzer. Frequently. After checking that everyone was present I issued a light-hearted warning to the exhuberant children (“it wasn’t me, it was him…”) about pressing the buzzer while we were moving. They took it in good spirits and we had a bit of banter.

Unfortunately I missed a vital turning on the way back and I muttered darkly in the cab as I searched in vain for somewhere to turn. With nowhere suitable nearby, I decided to take the long way round as I knew the road we were now on would eventually join up with the A370 and I could follow the route I’d taken earlier when empty.

The only flaw in this plan was the dreaded right turn towards the suspension bridge. But before that came the stiff climb up towards Leigh Woods, which saw me drop from 4th to 3rd and then to 2nd gear. YDL318 proved to be a great hill climber, even with a nearly full load, and ploughed on up the hill. There was a short level part which allowed me the chance to change up to third again. It’s in these situations that a clutch stop would have come in handy. As it was, I would have had time to roll a fag in the time it took for the revs to fall!

As I drew up to the lights by Ashton Court I indicated right but hugged the left kerb, judging my moment to swing the wheel. I changed to 1st gear as the lights changed and, watching the traffic island to my right like a hawk, hauled on the wheel like crazy. It seemed to take forever to reach full right lock and, if my hands hadn’t been fully occupied, I would have punched the air as we cleared the railings on the other side with about a foot to spare. One of the passengers told me later that there was a cheer and a round of applause as we made the turn successfully!

I breathed a sigh of relief as I pulled up by the kerb behind the Bristol L, which had arrived only 5 minutes earlier. Although I had taken the long way round, Paul had a slower journey as he had to slog uphill for longer due to having a fully loaded and rather under-powered bus compared to mine. Having an extra cylinder in the engine and a lower geared rear axle has its advantages!

So, with another duty done, we set off to Weston again. Once on the A370, Paul was able to use overdrive and soon disappeared ahead of me. Feeling a bit more relaxed, I enjoyed the leisurely drive back to the depot.