Just a quick post to say that I’m bringing a bus down to the Torbay Vintage Bus Running Day this weekend. It will be my old friend, the Hants & Dorset Bristol FLF DEL893C. 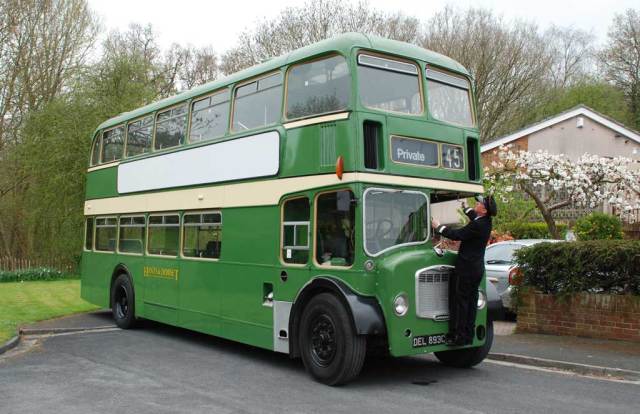 But first I have to take it out on a wedding job in Bristol, so it’s going to be a long day tomorrow! On Sunday, after stabling the bus overnight in Torquay, I will be running on a couple of free services as part of the Running Day and in company with several other historic vehicles.

So if you’re in the area, come and sample the aural delights of a Bristol crash ‘box! My big green friend and I will be heading either to Paignton or to Meadfoot and you can catch us on Torquay sea front.

You wait ages for a bus and then 12 come along all at once!

That could well sum up the cherry on the top of the Crosville cake, but more of that later.

After taking part in the preparations for the Crosville Running Day a few days earlier I was amazed at the transformation that had taken place at the depot when I arrived on the day itself. I was directed to park in the large compound at the end of the site. It was enormous and easily contained ample parking for the day’s visitors as well as static displays of heritage and modern vehicles. 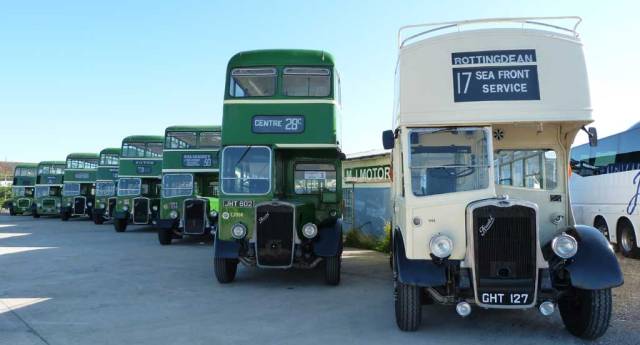 Returning to the depot I found a smart display of ex-Crosville vehicles either side of the depot’s main entrance. Among them was my steed for the day, a Bristol FSF6G open top bus. This has recently returned from an extensive restoration in the North of England and looked superb.

I wasn’t due to leave the depot with the bus until 10:30 so I browsed among the many society and trade stalls that had been lined up around the largely empty garage. Apparently the staff had spent many hours cleaning the floor until it was fit to accept visitors.

END_OF_DOCUMENT_TOKEN_TO_BE_REPLACED

Yesterday I spent some time at the Crosville Motor Services depot preparing vehicles for the forthcoming Running Day and Depot Open Day. I also had a meeting with a graphic designer in the town who may be able to take on some of the design and artwork I’ve been doing in my spare time. The volume of work required by Crosville has increased massively as the company has grown and matured, far beyond my capacity to keep up in my spare time!

It was very interesting to see Crosville during a typical working day. As I arrived, the Hants & Dorset Bristol FLF was up on jacks having its chassis cleaned in preparation for being silvered.

After my meeting with the designer I took myself off in the car to drive around the Service 152 route (Weston-super-Mare to Uphill) which is my rostered duty for this Sunday, the day of the Running Day. I’ve only ever seen the route on a map, not in the flesh, as I haven’t actually been any further into Weston than the depot!

In the afternoon I joined a team which was cleaning the heritage buses in preparation for the Running Day. These included several buses belonging to the Bristol Omnibus Vehicle Collection which are garaged alongside Crosville’s own heritage fleet. Already outside the garage door was a Bristol Omnibus Company (BOC) Bristol KSW. I donned a borrowed dayglo-orange overall and used a jetwash to rinse down the bus after one of the team had been around with a soapy brush. We also checked oil, water and fuel levels. 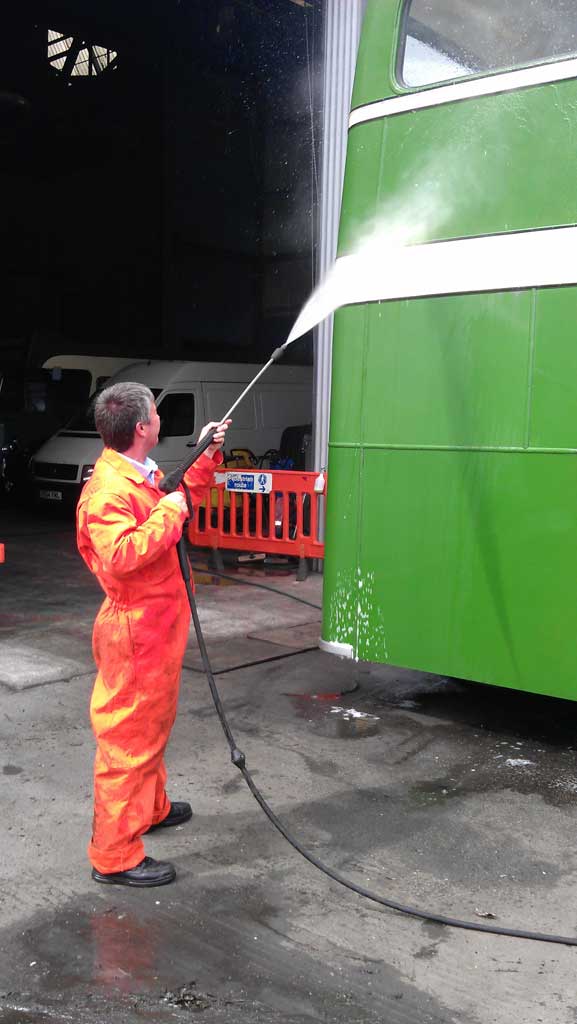 END_OF_DOCUMENT_TOKEN_TO_BE_REPLACED

A few days ago I took a bus load of very special people on a day trip to Lacock Abbey, Wiltshire.

They were special because they were my family! Mrs Busman John’s Mum is 80 this year and we’d decided to take her and all the family out for the day so we hired YDL318, a Southern Vectis FS6G from Crosville Motor Services.

The weather promised to be fine and in fact it turned out to be a scorcher. My wife and I arrived at the depot early in the morning to find that our bus was hidden behind a Bristol VR, which was kindly moved by a colleague while I started up the Lodekka’s Gardner 6LW engine and built up air. While I did my checks my wife got busy with the ribbons, balloons and bunting. There was a definite red, white and blue theme not only in honour of the Queen’s recent Diamond Jubilee but also because we had relatives visiting from the USA. They’re still very proud of being British so I made sure they were able ride in a proper British bus with the engine at the front and the platform at the back!

After fuelling up at Morrisons we headed up the A370 to Bristol and threaded our way through the city traffic which, thankfully, was light. As we arrived to pick up the family party, most of them were already outside with tables, chairs, boxes of food, drinks and even a fridge!

My youngest son Peter did a great job on the platform and eagerly issued souvenir tickets to all his relatives once we were under way.

As always, I had researched my route thoroughly and had decided not to bother with Tog Hill, even though it lay on the most direct route. Our bus only had a top speed of 30mph and a long drag up through Wick would add further time to the journey. So I stuck to the A4 Keynsham Bypass and on through Bath.

END_OF_DOCUMENT_TOKEN_TO_BE_REPLACED

On a recent family holiday in West Sussex recently I happened to visit the excellent Amberley Museum & Heritage Centre.

The whole site was interesting, more of which later. Of particular interest was a re-constructed Southdown Motor Bus Garage. Not only is it packed with all sorts of memorabilia, signs, equipment and spare parts (including 2 very old Leyland engines) but it also houses a fantastic collection of genuine Southdown Motor Buses from the 1920s.

Sadly none of them were active on the day of our visit but two steam vehicles were operating. A Marshall 8 ton steam roller was hauling a wagon fitted with bench seats around the site, giving free rides to visitors. Also present was a Sentinel S4 steam waggon. This is privately owned and is based at the Amberley Museum during the summer between visits to various rallies in the area.

The most fascinating displays were those which were presented by skilled, volunteer craftsmen. The printing works, engineering workshop – complete with working line shafting – and the woodworking ‘bodgers’ area were among my favourites. We spent a long time chatting to these amiable, knowledgable chaps and learned a lot about their respective crafts. I can highly recommend a visit!