It was a good opportunity to dust off my Setright Speed ticket machine and reacquaint myself with the duties of a bus conductor. Yes, dear reader, I was relegated to the back end of a bus last weekend. I’d had my name down to take part in the Exeter Twilight Running Day for some time, expecting to drive one of the Exeter Corporation Leylands. The bus in question, a PD2 of 1956 vintage, has been undergoing some restoration work and a repaint this year and wasn’t ready in time.

My friends at Crosville Motor Services brought Hants & Dorset Bristol FLF 1220 (DEL893C) down from Weston-super-Mare for the event and I offered to be conductor for them. The driver was my old colleague from Quantock days, Stuart Andrews. He and I worked together on the Service 400 ‘Exmoor Explorer’ and I was happy to note that he remains one of the most skilful heritage bus drivers I ever had the privilege to ride with.

This event now runs in the afternoon as well as after dark so the first free service departed from Exeter’s Bus Station at 15:15. For the rest of the afternoon and evening there was a constant stream of heritage buses coming into and out of the bus station. This shot shows a City of Exeter Guy Arab V, a Bristol LL6B coach and the H&D Bristol FLF mentioned earlier.

I think there were about 10 different vehicles operating the various routes and destinations included Redhills, Pennsylvania, Broadclyst, Crossmead and the Quay. Our first duty was the 15:40 to Crossmead, which took us along Exeter’s High Street, over the River Exe and up Dunsford Hill to a turning point near the Crossmead estate. Unfortunately a couple of cars had parked in the turning circle so Stuart had to reverse into a nearby side turning before returning to the bus station.

Also present were these two historic Leylands. The yellow Bournemouth Corporation bus carries the same MCW bodywork as some of the many trolleybuses for which Bournemouth was famous. Many ex-Bournemouth buses and trolleybuses have taken refuge at the West of England Transport Collection at Winkleigh, following the dispersal of a private collection in Bournemouth.

The green-liveried 1947 Exeter Corporation Leyland Titan PD2 has returned to service after many years off the road and is looking superb. As you can imagine, it was very popular!

Our FLF was reasonably popular too, carrying about 60 passengers on each trip. I slipped easily into conductor mode and went round the bus dispensing banter and tickets. I had to apologise to the bus afficionados because my tickets were Wilts & Dorset and not Hants & Dorset! I was however able to legitimately wear my genuine Hants & Dorset Conductor cap badge, which was noted by a few. I also carried around a collecting tin for the Devon Air Ambulance Trust (there were tins on all the buses) and most folk were happy to put a handful of change in.

The event comes into its own after dark and photographers were standing on every street corner, it seemed. The older buses, lit by yellow-tinged tungsten bulbs, made a fine sight as they toiled their way along the city streets. As the evening progressed and the temperature dropped, condensation on the inside of the windows added that extra bit of ‘atmosphere’!

After running out to Broadclyst and Hill Barton, Stuart and I retired to the lower level of the bus station for a break. Even there, occasional white flashes betrayed the presence of furtive folk gathering photo-fodder for Facebook and Flickr. One of my blog readers often contributes to Focus Transport so watch out for his report sometime soon.

On our last trip out to Crossmead one of our passengers commented about how wonderful our FLF looked. I had to agree, although I was a bit apologetic about the rough-around-the-edges interior. On the contrary, the aforementioned passenger replied. “I love the ‘in service’ look. For me, those buses that have been restored to mint condition don’t really capture the essence of bus travel in the 1960s and 70s”. So I guess we’ll be keeping that grubby ceiling paint and battered leather seats for a bit longer!

After crossing over the Exe Bridges, Stuart took a run up Fore Street Hill but his momentum was cut short by me. Or rather, a passenger via my finger on the bell. He wanted to jump off at the bus stop halfway up the hill! There followed a very slick snatch change from 1st to second gear on the steep gradient. There was yet another enforced pause in our ascent when Stuart had to stop for some pedestrians on a zebra crossing. I could almost hear muttered curses coming from the cab! Another snatch change followed before we reached level ground in the city centre.

That concluded our duties. The Crosville Crew was waiting by the departure bays to board the FLF for the long journey back to Weston. It was a long day for Stuart but I sensed that he really enjoyed his day with the FLF, even though he knew I had been ready and willing to give him a break from the cab at any time. The bus had performed faultlessly, thanks to the efforts of the workshop staff who had done some tweaks to the fuel system during the previous week.

My lift home to Torbay was aboard a Stagecoach Volvo B6 belonging to James Pratt. It seems strange to me, a lover of half-cab buses, that such a modern vehicle should be considered a preserved bus! 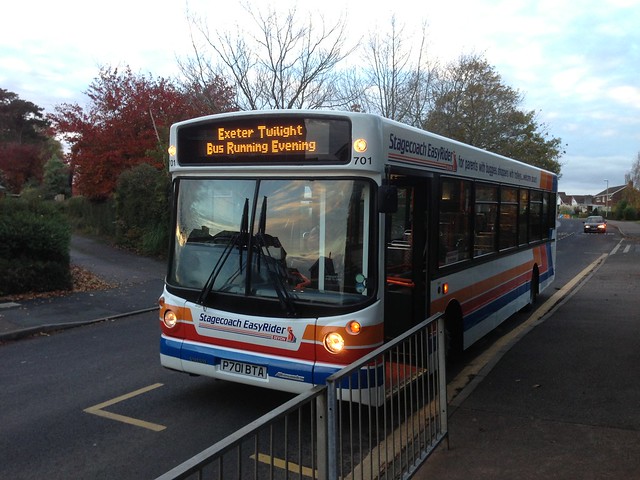