A few days ago I was once again given the honour of driving an ex-Bristol Omnibus Lodekka through the city it served more than 50 years ago.

LC8518 (972EHW) belongs to the Bristol Omnibus Vehicle Collection and is on hire to Crosville Motor Services at the moment. It is in immaculate condition, having completed a thorough restoration about 3 years ago. 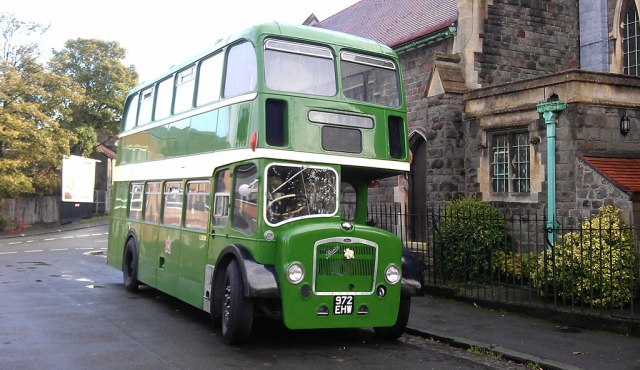 After doing my walkaround checks I brought the bus out of the darkness of the garage and into the daylight. My conductor arrived shortly afterwards and, after re-fuelling the bus at the newly-commissioned bowser (hooray, no more trips to Morrisons!) we set off up the A370 for Bristol. By coincidence, the pickup point for this private hire duty was just a stone’s throw from where my parents-in-law live, so I didn’t need to research the route at all! The weather was dull, cold and wet so I wiped the condensation off the cab windows while we waited for the bridal party to board.

The trip to St Aidan’s Church, St George was very light, with only the bride, her parents and bridemaids on board. This leg of the journey was mostly new territory for me so, once again, I had studied Google Maps and carried a bullet point list of directions in the cab just in case. When we arrived, Barry my conductor commented that he was impressed that I appeared to know my way around Bristol better than he did, and he was brought up there! I had to admit my reliance on Google and some previous knowledge due to family connections. I also had to admit that, in the event of a road closure somewhere on my planned route, I would have been a bit stuck! My PCV training taught me to always have a Plan B but I’m afraid I don’t often have one up my sleeve.

After about an hour and a half, a rather pathetic bell began to toll. Perhaps I’ve been spoilt by some of the more well equipped bell towers at other churches! The congregation started to spill out of the church and a haphazard photo session ensued. One gentleman with a stick managed to go AWOL and headed in our direction, more interested in the bus than having his photo taken. He sat on the bench seat in the lower saloon and began to talk to us about old Bristol bus routes, unheated Bristol K types in the winter with icicles on the inside, yellow nicotine stains and the price of a journey to the Centre. Eventually a lady came running up to the bus, clearly looking for our chatty gent. “There you are, Gordon,” gasped the messenger. “We’ve been knocking on the toilet door for ten minutes. You’re needed for the photos!” The gent, now looking a bit crestfallen, followed the lady back to the church. “I’ll see you chaps later,” was his parting shot. 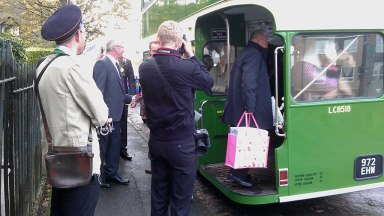 Photos done, everyone headed for the bus which quickly filled. Barry and I stood by the platform ready to assist anyone who struggled with climbing onto the platform. He held the traffic for me while I reversed out of the lane where we had parked the bus, gave me two bells (buzzes actually) and we were on our way. Fortunately it was mostly downhill from then on. Our destination was the harbour, now redeveloped beyond recognition into designer outlets and boutique eateries.

As always, I was intent on giving my passengers a smooth ride. Most tricky with this bus is the delayed response from the Bristol AVW engine, especially when changing down. As is usual with a constant mesh gearbox, the driver must raise the engine revs while briefly in neutral before engaging a lower gear. In a Gardner-powered bus the engine responds to the throttle input almost instantly but a Bristol engine is a bit more lazy. This needs to be taken into account before dipping the clutch. I’ve had this bus on a couple of occasions recently so my downchanges were nice and quiet.

It was very satisfying to drive this ex-BOC bus through the city centre, as it would have been such a familiar sight many years ago. I had to chuckle to myself when I saw a gentleman of a certain age look at his wife, pointing at the bus as it passed by. I could almost hear him say “Ooh look, we used to go to school on one of those!”

I took the bus as close as I could to the reception venue, one of the aforementioned eateries. The bride and groom, who had been riding on one of the sideways seats downstairs, were last to leave and made some kind comments as they stepped down onto the pavement. Makes it all worthwhile! Barry once again waved me back as I had to reverse out of the cul-de-sac and turn the bus before the empty journey back to the garage.

The next day I took the same bus (with a different conductor) down to the Exeter Twilight Running Day. That will be the subject of my next blog post.