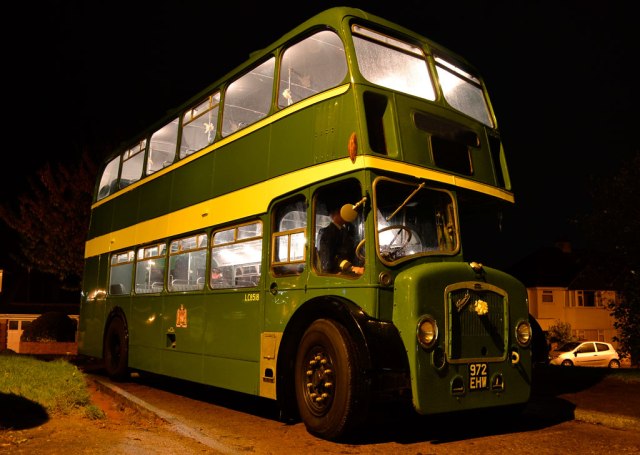 It was one of those times when a day spent driving a halfcab bus is like a session at the gym. By the time I had parked the bus back at the depot in the late evening of Sunday November 10th, my arms felt like jelly. But it was so worth it!

I met my Simon, my conductor for the day, at the garage and we prepared the bus together. We had ex-Bristol Omnibus LC8518 (972EHW), the same vehicle that I’d driven on a wedding duty the previous day. Also being prepared was London Transport RTW29, a rare 8ft-wide Leyland-engined RT. Its bright red livery was being buffed to a shine by Jon, the MD of Crosville Motor Services, who was joining us at the Exeter Twilight event.

We set off as soon as we were ready and took the Lympsham road out of Weston-super-Mare. As I coaxed the bus up to a breathtaking maximum speed of 35mph, my conductor donned my conductor gear and settled down for the long journey to Exeter. I always feel rather vulnerable on the motorway with such a slow vehicle and kept checking my rearview mirror for traffic approaching from behind. Plan B: hit the hard shoulder!

Just before Taunton a familiar shape loomed up behind the bus, that of a green Bristol L. It passed us and slowly disappeared into the distance, probably doing 45mph or more. Taking a comfort break at Taunton Services, I was surprised to see the same single deck bus already in the coach park. I parked nearby and got chatting to the driver. The bus was in fact not a Bristol L but an earlier Bristol J (built 1934) but received a new body in 1955 along with a more up to date PV2 radiator. This made it look like a Bristol L.

The other driver wasn’t familiar with Exeter so asked if he could follow me to the bus station. I was quite happy about this as I know Exeter well, having worked there in the past.

We plodded on and eventually reached the bus station. Unfortunately we’d missed our first trip by about 10 minutes due to our unplanned stop so we parked up in the lower level coach park and wandered round looking at all the other heritage buses and coaches, some of which were still arriving.

One stood out from the rest on account of its age. This ancient looking Leyland Tiger TS4 was built in 1932 for Wigan Corporation and, I think, usually resides at the West of England Transport Collection, Winkleigh. Later on, after darkness had fallen, I saw it being driven very vigorously by a chap wearing a baseball cap. I thought a flat cap might have looked better, if he didn’t have a uniform cap to wear!

The duty I’d been given began with a couple of trips around the Hill Barton Circular so I brought the Lodekka into the Bus Station and was directed into Bay 3 by my old friend Bob Wingrove who, as his cap badge proclaimed, was Chief Inspector for the evening. There was a huge queue waiting and another Inspector in full winter uniform was directing people to board for Hill Barton. As it happens, he also owns the bus I was driving! By now the light was fading so I put all the lights on, including the interior ones. Two beeps on the cab buzzer told me that we were full and it was time to depart. I faintly heard a whistle from the Chief Inspector advising me that it was safe for me to reverse away from the stand so I gave two toots on the horn and backed out.

As I pulled away from the traffic lights outside the bus station I was keenly aware of many discerning eyes and ears behind me. Whereas most of the passengers I normally carry on wedding jobs are only bothered about reaching the venue on time, those today were mostly enthusiasts, other drivers and even a Stagecoach manager. The pressure was on!

Last year I did the Hill Barton Circular as a conductor so I knew the route. The only hazard I met was in a residential road where several cars had parked in alternate spots either side of the road, meaning that I had to weave in and out of the spaces. One was particularly tight and I signalled to Simon to leave the platform and guide me through. At times like these you need to be able to trust your conductor’s hand signals!

After a brief photostop, we headed back to the bus station. There was an arched bridge on the way back, where the Exeter – Exmouth railway line crosses the road at Polsloe Bridge so I made sure I was positioned as close to the middle of the road as I could. The sign on the bridge indicated that there was plenty of headroom for the 13′ 6″ Lodekka to pass beneath but I wasn’t taking any chances!

Back at the station, it seemed to take ages for the bus to empty. We backed out, drove round the block and parked up for a break on the lower level. Half an hour later we returned and did the Circular with another full load. The red RTW left just ahead of us, doing a different route. It too was popular. I don’t think a London bus has participated in this event before. During the next break I had some food and chatted to the driver of Bristol VR VDV137S, owned by WHOTT, and one or two other folk that I knew.

Our final two trips took us through the main High Street, across the Exe Bridges roundabout and up Dunsford Hill to Crossmead. This was the only significant climb of the evening. I opened the sliding window to listen to the healthy roar of the Bristol AVW engine as we forged our way up the hill in 2nd gear. The photo at the top of this post, used with the permission of photographer Tim Squires, shows the bus parked in the turning circle at the top of the hill.

It gave me a great deal of satisfaction to drive one of my favourite buses through familiar areas. I couldn’t help thinking back to 1985, when I had a few lessons in an ex-Hants & Dorset Lodekka, then being used as a Devon General training vehicle, on the same streets.

The last trip was lightly loaded and, although our duty sheet showed one more journey, the Station Inspector came up to the cab and told me that they were winding the event down and my last trip was pulled. I didn’t complain – my arms were really beginning to ache and we still had to get the bus back to Weston-super-Mare! Feeling very satisfied after a very enjoyable evening, I pointed the 54-year-old bus northwards into the night.

I must pay tribute to the team who organised the Twilight Evening. From a driver’s perspective, it was extremely well run. The duty sheets, maps and timetables were clear and well presented, vehicle movements were expertly marshalled and passengers seemed to have all the information they needed. Well done Dan, Dave, Bob, Mike and Ken!

The rest of Tim’s photos from the evening can be seen here and another set by Tom Walters is also worth a look.