The chilly morning air hung motionless above the River Dart as I met my new colleague, who was wiping the dewy moisture from the windows of our bus. I have joined Greenway Ferry Pleasure Cruises to drive their vintage bus from Torquay to Greenway House, Galmpton. The other driver and I had met before so we went through the walk round checks together. 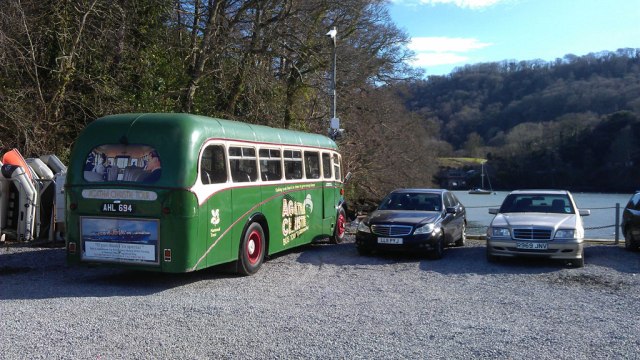 I was to spend the day learning the route so I sat behind the driver as we set off up the steep hill from Greenway Quay, where the bus is stabled overnight when in service. The window behind the driver has been removed to facilitate One Person Operation so he was able to point out things along the way and give me tips and advice.

After negotiating the narrow lane from Greenway through the village of Galmpton we emerged onto the main Brixham to Paignton road and headed north towards Torquay. We had left early so we parked beside Paignton Green for a while so that we could chat to passers by and drum up business.

The bus drew many admiring glances. It is a 1947 Leyland Tiger PS1, delivered originally to H. Bullock of Featherstone, Yorkshire. It has had a long, hard life. After operating on rural bus routes in Yorkshire it was sold out of service in 1965. It’s history since then is patchy and I’m determined to find out more about it. In the 1970s it was rescued for preservation from a gliding club and it is rumoured that a well known cast member from TV’s ‘Casualty’ was once an owner. It is also rumoured to have appeared on TV’s ‘Heartbeat’ as a mobile library but, for me, its greatest claim to fame is that it is one of only two roadworthy buses to carry a Barnaby body. Unless you know different, of course.

We carried on along the seafront in the sunshine to our first stop, in Belgrave Road, Torquay. After taking some leaflets into a nearby hotel, we awaited our two pre-booked passengers. For some reason they never showed up so we carried on to the next two stops in Torquay. Still no passengers, not even passing trade. Well, it was the first journey of the 2014 season so perhaps it takes a while for word to get around.

Finally we picked up a couple of people as we passed Paignton seafront again.

We rumbled along through Goodrington, Churston and Galmpton before arriving at Greenway House, for many years Agatha Christie’s summer residence. I was introduced to some of the National Trust staff and we were offered a free coffee and warm scone in the café. Yummy!

Our next trip was to Brixham Quay where another two passengers were waiting. On the way back there is another stop at the Churston Farm Shop but nobody was waiting so we sailed on by. A long lunch break followed, before a return to Brixham and then to Paignton to take our handful of passengers back. The bus now empty, I was asked to take the bus back to Greenway Quay. I have driven AHL694 once before, last autumn, when I had a driving assessment. The gearbox is a bit peculiar, being a bit of a hybrid. Basically it’s a standard four-speed PS1 box but with parts from a later synchromesh box. To be safe, I treated it as a crash box, using my tried and tested double de-clutch technique. Being new to this bus, there were of course some noisy moments as I was adapting my technique as I went along. I’m sure there will be more crunches, as I’m sure it will take me some time to become as proficient as the other driver.

I had to go very carefully down the final hill to the Quay as there is a tight bend with stone walls both sides but I had earlier been shown how to negotiate this so, going slowly, I got through without any scrapes.

The next day it was my turn to drive, while the other driver dealt with the passengers and commentary. The day followed the same pattern as before but this time there were more passengers. When I was training to be a bus driver, my instructor always told me to have a Plan B when I was planning my route and today I needed one. As we arrived at the seafront road in Torquay we discovered that one section of it was closed due to construction work on a new hotel. We had not been notified of this so I had to take a diversionary route up Shedden Hill and down through Torquay town centre to reach the harbour stop. Driving in my home town has its benefits as it wasn’t difficult to plan a suitable route. Another benefit was that we drove down through Fleet Walk, pedestrians and buses only! Hopefully the Agatha Christie branding on the side of the bus will have generated some interest with potential customers.

As the day wore on, I wore out. In other words, the heavy steering began to take its toll! Perhaps the long winter abstinence from regular heritage buses has allowed me to get out of condition or maybe the PS1’s steering really is heavy. I did wonder if the front tyres could have done with a bit more pressure…

So, training and route learning done, I’m out on my own next time.

11 comments on “A new job with an old Tiger”