Several weeks ago I wrote a blog post about a long trip up to Yorkshire to deliver a Bedford OB coach to a restoration centre. I was also given the chance to bring the same vehicle back to Somerset again after it had been tidied up. Despite the distance, I decided to accept. Not least because if I start a job, I like to finish it!

Unlike last time I decided to do the return trip in one day, having been assured that the misfiring which had plagued the outward journey had been fixed. So, after travelling up to Hunmanby on the train the day before, I turned up bright and early at Cobus. Steve Waggitt, the proprietor, was there to meet me and was grinning like a Cheshire cat! And here’s why: 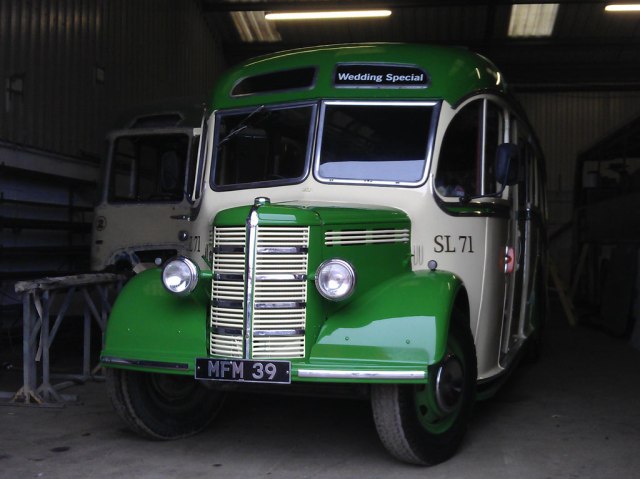 I followed Steve round to the garage where ‘Bosworth’ the Bedford stood, ready to go. The Cobus team had worked a miracle on the Duple Vista-bodied coach, which had externally looked a bit tired when I delivered it three weeks earlier. Now it stood looking for all the world as if it had just been built! The patchwork-effect Tilling livery, previously several shades of cream and green, was gone and in its place was a showroom-finish paint job that left me awestruck.

Steve proudly showed me the aluminium trim which had been polished and mounted on rubber strips. New glazing rubbers had been fitted around the back windows and all the dinks in the panels had been levelled and filled. They had done a top job, right down to the finely signwritten legal lettering.

Anticipating such an immaculate appearance, I had brought my uniform with me, complete with Crosville cap badge. It didn’t matter that only a few people would see it, I just wanted to mark the occasion in my own way.

After doing the usual checks I had to bid farewell, thanking Steve and several of his craftsmen for their excellent work. I pulled out the choke and started the engine – it burbled away satisfyingly on all six cylinders!

I was soon on my way, stopping only to take a photo in the village of Carnaby which is where Cobus used to be located until recently.

From then on, it was a matter of following the road signs to The South. Once again, I couldn’t help smiling as we passed the brown tourist sign for the ‘Battle of Bosworth‘! I stopped at a service station on the M18 and again at Tamworth, where I took on fuel. Bizarrely, I met a coach driver who lives just down the road from me. He admired the elegant little Bedford, which was dwarfed by his modern coach alongside. “They have a vintage bus a bit like this one in Torbay. It goes past my house.” “Oh yes, I know the one you mean. In fact I’m one of its drivers!”

As I pulled away from the coach park I was aware of lots of eyes following me as the Bedford gave them its aural symphony. Some say that the gearbox whines but I say that it sings!

The miles ticked by until we reached the Almondsbury Interchange, where the M5 meets the M4 near Bristol. Back on familiar territory and with an aching back, I kept the speedo at around 42mph but wished I could go a bit faster as by this time I was hungry, thirsty and tired! Eventually I arrived at the Crosville depot as the light was fading and drove past a couple of guys washing and fuelling the service buses. I parked the OB in the same spot it had vacated a few weeks ago, gathered my belongings and steeled myself for a further one and a half hour drive home.