The proms season is upon us once more but sadly, for Busman John at least, it doesn’t involve any Pomp or Circumstance.

No, a busman’s lot is a noisy but unmusical one if he is to be sent on a school prom duty. Once called the School Leavers’ Party (or, if you went to a posh school, End of Year Ball), the general term used nowadays is Prom. An American import, I suspect.

Today I had two school prom duties in Torquay, both with the English Riviera Sightseeing Tours Leyland PD2 (FFY403). This morning’s tour was a very busy one, with 40 sightseers on board. Once we’d returned them to the harbourside at Torquay I bade farewell to my Tour Guide, who had the afternoon off. Taking his place on the platform was my son Peter, whose last duty with me was at Salisbury for the Wilts & Dorset Centenary. We like to keep it in the family!

We took the PD2 off-route past Torquay’s two Grammar Schools and into Sherwell Valley Primary School. I had to smile as we drove slowly past several classrooms, repeatedly capturing the awestruck attention of the excited pupils within. In the school playground, which this afternoon was turned into an impromptu bus station, the PD2 was decorated with balloons, streamers and class photos. Soon we had been joined by two stretched limousines and three pink minibuses. Yes, dear reader, pink. This incongrous collection of celebratory conveyances was booked, not by the school, but by the parents of the Year 6 pupils who were leaving the school to start their secondary education.

Using the on-board PA apparatus, I welcomed the ‘little darlings’ onto the bus and gave our customary warning about staying seated and the potential hazards of passing beneath low branches. Finally, a question: “Are we all going to have fun?” to which the answer was a loud cheer. With that out of the way I started up the bus and confronted the first hazard, which had the potential to be a literal showstopper. The school caretaker had opened a gate at the end of the playground to enable the vehicles easier access back to the main road. I had earlier checked this out and was concerned to find a short, sharp gradient leading up to the road. Aware of the possibility of the rear of the platform going aground as the front of the bus tilted upwards sharply, I passed through the gate very slowly listening for a grating sound. There wasn’t one, thankfully. If I had been driving a Bristol FLF we would definitely been in trouble!

With Peter on the back making sure that everybody stayed upstairs, we made our way down to the seafront, past the harbour and up towards Babbacombe where we drove past the famous Hotel Gleneagles (allegedly the inspiration for the TV comedy Fawlty Towers) in order to be facing the right way for the drop-off. We drew the attention of passers by and other motorists, many of whom waved or tooted their horns in reply to the singing and shouting from the top deck.

Finally we arrived at AMF Bowl, a ten-pin bowling emporium which occupies what used to be the Grey Cars coach depot many years ago.

Then we had to high-tail it along the coast road to Paignton and Oldway Primary School, where a smaller Year 6 group awaited us. More decorations were added to the bus. A portable ‘boom box’ music system was brought aboard and I was asked “Do you have a PA system?” Reluctantly I had to answer, yes. Oh dear. Singing, shouting AND badly amplified music. 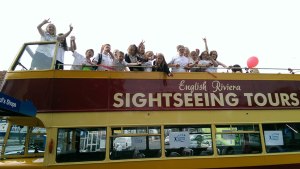 Once again we set off to ‘promenade’ the children around the town, along the seafront and back to a local church where the leavers’ party was to take place. The loudspeaker beneath my seat, normally a helpful means of eavesdropping on the Tour Guide’s entertaining patter, proved to be a distraction. Our microphone had been placed next to the boom box, which blared out disco tunes distortedly at full volume. There were frequent gaps in the ‘music’ as the bumps in the road caused the CD player to skip. Ugh!

We left the exhuberant children to enjoy their party and returned to our base at Torquay’s railway station, passing the charabanc on the way. We stripped the bus of its decorations and placed a heavy duty cover over the top deck – heavy rain is forecast for all day tomorrow so no tours are likely. [Confirmed, as I complete this post!]

Back-pedalling briefly, our well loaded morning tour could have been a very tiring affair had it not been for the two new tyres the bus was wearing today. After the tours had finished yesterday I had driven the PD2 over to Newton Abbot to have new tyres fitted to the front wheels and the old girl is now noticeably lighter on her feet.

Coming up next is a wedding duty for Crosville on Saturday with a 1950 Bristol L5G. While at the depot I hope to take a pic or two of one of Crosville’s latest arrivals, a 1931 Sentinel Steam Bus.

4 comments on “Going to the proms”