Some people called it the ‘Slow & Dirty’. To others it was the ‘Serene & Delightful‘ but, however you wish to recall it, the Somerset & Dorset Joint Railway has become one of Great Britain’s most celebrated railway lines and, 50 years after closure, it still remains as popular as ever.

I had the chance a few days ago to be involved in the West Somerset Railway’s excellent Spring Gala, which took the 50th anniversary of the S&D’s closure as its theme. For my part, I provided a bus link between Taunton railway station and the WSR’s southern terminus at Bishops Lydeard.

It was a very enjoyable day but there was a price to pay – I had to leave my house at 04:30 to be in position with my allocated bus by 07:35! Good grief, why do I accept these duties?!

Once again the staff at Crosville Motor Services had done their bit. My bus, a 1975 Bristol VRT originally supplied to Crosville in Chester, had been cleaned and fuelled the previous day before being parked at the front of the garage. Dawn was just breaking as I drove out of the depot, heading for Taunton.

It always takes a while to become really familiar with a bus that’s ‘new’ to me. I hadn’t driven this VR before but I quickly found that it’s in great shape, remarkably free from the creaks, groans and rattles that usually accompany a ride in a bus of this type and age. The semi-automatic gearchange was a delight, too. Some semi-auto ‘boxes seem to hang on to the previous gear too long when changing, making for a rather jerky ride but I found it easy to make changes that were silky smooth. The trick, of course, is to pause in neutral as you would with a manual box while the revs die away, otherwise the bus will lurch forward in the new gear. Not only that but it’s not good for the transmission either!

My first departure was 07:45, as advertised in the Railway’s publicity. Only four hardy souls boarded! The journey to Bishops Lydeard only took about 20 minutes and on our arrival a member of the platform staff came and introduced himself. He was keen to know how long my journey had taken because the next arrival would connect with the 09:05 train to Minehead.

There was no problem meeting this train and enthusiasts in greater numbers formed a queue at the ticket office window. After two more trips, my morning’s work was done so I parked the bus in a coach bay and walked up to the ticket office myself. I had been in contact with the WSR’s Commercial Department a couple of weeks earlier on a marketing matter and the fruit of this was that I found myself on the platform holding a free Day Rover ticket!

Bishops Lydeard station had been renamed Templecombe for the duration of the Gala. Every station along the WSR (and there are 11 of them if you include the seldom-used Norton Fitzwarren platform) had very smart running in boards featuring the names of erstwhile stations along the old S&D. I thought that was a good way to commemorate the line and the temporary signs were excellently produced. I caught a train headed by two locomotives which were synonymous with the S&D, a 7F 2-8-0 (53808) and a 4F 0-6-0 (44222). Both are now resident on the WSR and both had only recently emerged from heavy overhauls. 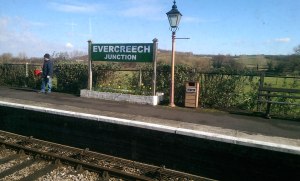 The rest of the home fleet (mostly GWR locos) had been sidelined in favour of 6 visiting engines which had either run on the old S&D or represented classes of loco which had. At almost every other station with a passing loop we passed another train. That’s one of the good things about these gala events – the railway usually runs an enhanced service, using every available path.

On arrival at Minehead, the northern terminus of the Railway, I found a hive of activity. A train on the other platform was being prepared for departure and some shunting was going on by the loco shed. All the time I was there at least 5 locos were in action, some being turned and being prepared for their next duties or, in the case of the diminutive 0-6-0ST Kilmersdon, running short trips out towards Dunster with an immaculate 4-wheel carriage. This was S&DJR No 4, now nearing the end of a long restoration carried out at Washford by the Somerset & Dorset Railway Trust.

I pottered about, watching locos being coaled and watered. I noted the Railway’s MD, Paul Conibeare, wandering among the crowds on the platform and enjoying some banter with volunteers in the Turntable Cafe. This is where I retreated to escape the cold wind and to have some lunch. Later on, having noticed that the workshop was open to Gala visitors, I popped in, left a donation and looked around at the 2 locos which were inside. GWR 4-6-0 No 6024 King Edward I (on the right in the photo) is undergoing a heavy overhaul, which includes fitting 2 new outside cylinders to enable the loco to travel on national network lines from which it would otherwise be banned due to the width of the GWR ‘King’ class locos. Also in a very dismembered state was WSR 9351, a 2-6-0 tender engine that started out as GWR No 5193, a 2-6-2T ‘Large Prairie’ tank loco. By the look of the work done so far, these two workhorses will emerge as good as new!

My return to Templecombe, aka Bishops Lydeard, was behind LMS 8F No 48624, another visitor and a last minute replacement for an LMS Black Five that was unable to reach the WSR.

Fortunately services were running on time as I only had about 25 minutes before my first departure back to Taunton. I had taken the precaution of telling the Stationmaster which train I would be returning on, had there been a delay. As always, I tried to give my passengers a swift but comfortable ride. Even though they were unlikely to be bus afficionados, it’s better to leave them with a good impression than to have them remember their bus driver for all the wrong reasons!

As I waited for the final departure I wandered into the gift/model shop on the platform at Bishops Lydeard, mostly to escape the cold but also to find some company. The friendly shop staff told me all about their day and alerted me that the last train of the day was running up to 15 minutes late. It had already been a very long day (and wasn’t over yet) but I offered to wait until the train arrived. The kind lady in the shop, who also doubled as the station announcer, promptly offered me a cup of tea which was very welcome!

The train finally appeared out of the darkness and rolled into the station behind a classic S&D pairing of a 4F and a Bulleid Pacific. A tannoy announcement encouraged bus passengers to step along smartly so as not to keep the driver waiting too long! At last, after the passengers had left at Taunton station, I let out a sigh of relief and headed northwards to Weston-super-Mare. The ability of the VR to bowl along at 50mph was much appreciated at that time of night!

Looking back, although it was an extremely long day, I can honestly say it had been very enjoyable. Full marks to the folks at the WSR who have put on a first class gala. Thanks also to the staff for making me feel welcome and letting me travel for free. I’m due to do it all again next Saturday. Glutton for punishment, some would say. Some people have been predicting that it will be the busiest day of the event so I may well be carrying full loads, especially as I will be driving a single decker!