Some private hire duties with heritage buses involve driving many miles to reach a far-distant destination. On others, the destination is just around the corner. For this job, it was both. 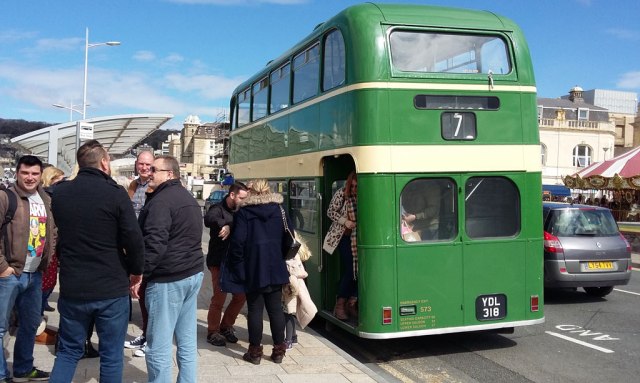 According to my Work Ticket, the destination was about a mile from the Crosville garage – Weston-super-Mare seafront. The only snag was, I had to drive to Keynsham first!

The occasion was a birthday bash for a chap who was celebrating his big Five-O and that of a little girl of seven. They and a party of folk including friends and family had booked the bus for a trip to the seaside and so I drove the 26 miles to Keynsham at the stately speed of 30mph to pick them up. Apparently many of them were members of a local VW Campervan (often referred to as a ‘bus’) club, so were delighted to see the Bristol Lodekka turn into the car park to meet them.

Prior to this I had no idea what kind of event they were going to so, as soon as I learned that birthdays were involved, I set the destination blinds appropriately! On the way there with the empty bus I nearly had a panicky moment when I was confronted by ‘Road Closed’ signs on one of the main roads through the Bristol suburbs. Fortunately I had driven along a parallel residential road on a previous private hire job so I was able to continue my journey with a hastily chosen Plan B.

By the time everyone had boarded we had half a bus-load. Understandably they all decided to travel on the top deck and, as we picked our way through the busy centre of Keynsham, I wondered whether this would affect the handling of the bus. I needn’t have worried. Lodekkas, in common with most double deck bus designs, have a low centre of gravity so I barely noticed that everyone was up top. I had warned them about the detour around the byways of Hartcliffe but discovered as we rejoined the main road that I needn’t have bothered because the closure only affected east-bound traffic!

After trundling down the A38 past Bristol Airport and through the villages of Churchill, Sandford and Banwell, we reached Weston-super-Mare seafront and deposited the passengers at the Grand Pier bus stop. I had a couple of hours to spare before collecting them for the return journey so I parked the bus up at the Crosville depot and drove back to the seafront in my car to have lunch and a busman’s siesta.

Back at the Pier stop with the bus I could tell that the birthday party was well under way when I was asked to make an additional stop on the way back. “We’ve been in the pub John,” the organiser told me, as if I didn’t know, “and we’ll need a loo stop on the way back!” So we arranged to stop at The Railway Inn at Sandford. I swung the bus into the car park beside the pub and, as the revellers hurried away (some with more urgency than others) I wondered if I should be prepared for a wait while they downed a few more quick ones. About 45 minutes later (I was right) they started to wander back and we resumed our journey.

The volume of traffic in the Brislington area (where the bus was originally built) was much greater than before, as it was late afternoon by now. By the time we reached Keynsham the aforementioned liquid refreshments were having their predicable effects. As we approached the first pub in the town the bell rang and someone banged on the window behind me, mouthing unintelligible words. I guessed what was being said and pulled over smartly. A small group of people dashed purposefully into the pub not, I suspected, heading for the bar.

The final drop-off was yet another pub a few hundred yards further on. The group leaders made sure I knew that they’d had a fantastic day and, as a final treat for the birthday boy, I allowed him to sit in my seat for a photo.

Setting off again for Weston, I began to feel like I was on a twice-a-day country service in the 1960s. Plodding along the trunk roads at snail’s pace was probably more acceptable then, when most large vehicles were – by today’s standards – underpowered and limited to 45mph at the most. I remember in my childhood seeing clapped out Wilts & Dorset Bristol KSWs en-route from Salisbury to such far-distant places as Hindon. I often used to wonder as they lumbered past my grandparents’ house whether the poor old things would ever make it!

Like them, I did eventually make it back to the garage but I was glad to have a bus in fine fettle. My progress was only hampered by the miserly top 30mph speed of this Southern Vectis Bristol FS6G and the need to make use of laybys frequently to allow following traffic to pass.

I’m due to drive the 1947 Leyland PD2/3 open topper in Torbay again this year on sightseeing tours. The bus has already undergone winter repairs and has been taken for its inspection. Yesterday I extracted a dusty Bristol LH charabanc from its winter storage and brought it back to its Torquay base. It is still as rough and rattly as ever but, after a good wash and brush up, will present itself for further service in a few weeks time.

In a few days time I’m due to travel north to collect a 1938-built single decker – the latest addition to the Crosville heritage fleet. Watch this space for a report on that adventure!

2 comments on “The Weston-Keynsham Shuttle with YDL318”