A recent outing with a vintage bus saw me doing a solo duty for a wedding in West Somerset. 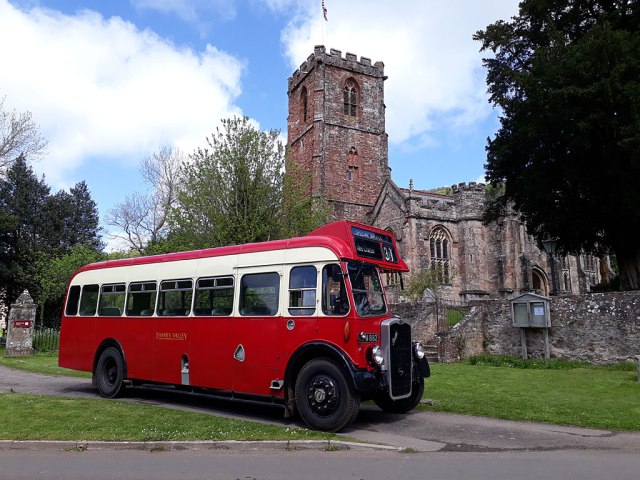 This was one of a handful of private hire duties I’m doing for Quantock Heritage as I’m keen to keep my crash-box skills finely honed!

The duty was solo in more ways than one, because there was nobody around at the depot either so I had to prepare the bus on my own. Fortunately, having done a duty here back in February, I knew the drill and the bus had already been checked, washed and fuelled.

My allocated bus was Thames Valley S302 (GFM882), formerly Crosville KB73/SLA73. It is a 1948 Bristol L6A, the ‘A’ signifying that it was fitted with a 6-cylinder 7.7 litre AEC diesel engine, rather than the more usual Gardner 5LW or Bristol AVW unit. This bus was converted by Crosville to OMO format comparatively early in its career in 1958 and has remained this way ever since. The bulkhead behind the driver has been removed, the side window set at an angle and a mounting for a Setright ticket machine provided. You can see the layout in this view, facing forwards.

Eventually my preparations were all done and I could put the moment off no longer. Yes, I was a little hesitant having not driven a crash ‘box bus since September 2018 and had never driven this particular example before. Fearing that there would be ‘Much Grinding in the (Langley) Marsh’* I set off gingerly down the hill and round the corner into Wiveliscombe, managing to find all the gears successfully. Downchanging was a different matter however and I made a right hash of several changes as the bus wound its way through the narrow streets of the town. Thankfully I had the empty journey to the pickup point to brush the cobwebs off my technique.

I soon discovered that this L6A has a well set-up clutch brake which enabled me to make quicker up-changes than usual, which is very useful when changing up a gear on uphill gradients!

I had researched the route and locality previously, as is my custom, but I could easily have come unstuck at the venue had it not been for the timely presence of the bride’s mother. I was just about to turn into the drive of the big house where the bridal party was gathering when the aforementioned lady jumped out of a car that had been following me and told me that marquees and gazebos had been set up beside the house, leaving nowhere to turn the bus. Thanking her profusely, I re-positioned, let her drive up to the house and then reversed up the drive. That could have been awkward! In fact it was still tricky because of the limited space available in the lane in which to manoever through the narrow gate.

Traditionally, brides are allowed to be late arriving at the ceremony and this bride was no exception. It was about 20 minutes after the stated pickup time that the bridal party emerged and boarded the bus. But nobody seemed to mind so perhaps this was the only wedding that day at the church. During the long wait, three things occurred. There was a gusty wind blowing that day and one of the caterers’ gazebos took flight and landed upside down in a crumpled mess. I went to help them recover it. The second came when I added my own little touch to the front of the bus.** The third? I walked down the drive to prop the main gate open as wide as it would go to give myself as much clearance as possible.

Once everyone was seated I drove down to the lane and retraced my steps (or should that be tyre tracks?) back to the main A358 road that eventually leads to Minehead. Before reaching it the lane passes over the West Somerset Railway line close to Crowcombe Heathfield station. It would have made a great photograph for someone on the station platform if a train had been passing under the bridge at the same time! The approach to one of the junctions in the lanes was on quite a steep gradient, which meant I had to start in 1st gear, followed by a swift snatch change into 2nd. Crowcombe Parish Church (pictured at the top of this page) is only a mile or so away from the private house I had started from so the journey was relatively short. The vicar was standing in the sunshine waiting for our arrival and, soon after I had reversed to bus off the road, several members of the bell-ringing team began to assemble. Apparently the bride’s family is well known in the village and, although the bells hadn’t been requested, they were going to be rung anyway as a surprise.

The outward journey was just to convey the bridal party to the church but the return was to bring them, plus most of the guests, back to the house where the reception was to be held. The Bristol L only seats 35 and there were more than 50 guests so I had to do a double run. Thankfully there was only one missed gear, just as I passed over the railway bridge but everyone was so busy chatting that I don’t think anyone noticed!

Driving a vintage bus down a single track lane can be awkward if traffic comes the other way but, in most cases, drivers are considerate and will pull into a space to let me go by. There’s always one who makes life difficult and I met one on the second return journey. He seemed reluctant – or unable – to reverse his car into a space he had passed a few yards away and we came to an impasse. Amid exclamations of “oh surely he can reverse his car into that space, he could see us coming!”, I selected reverse and backed up so that the other driver could drive forward into another space. The only difficulty for me was that I had to lift the stick, jam it hard over against the engine bulkhead and haul it backwards into reverse gear. The bulkhead bears the evidence of this close proximity!

With all passengers heading towards the canapés and prosecco, I set off down the lanes one final time, this time heading for the little depot in Langley Marsh. It had been wonderful to get behind the wheel of a ‘proper’ bus once again and to renew my acquaintance with the Bristol crash gearbox. The Tilling red and cream Thames Valley livery brought back memories too. As I trundled along the main road I imagined myself driving a Wilts & Dorset Bristol L back in the 1950s!

In my absence one of the other single deck buses had been taken out on a duty so I reversed the Bristol L into the small shed next to the Leyland Lion, did my paperwork and left for home feeling very satisfied with the day’s work. Here’s to the next one!

*Readers of a certain age might remember a programme on the wireless of a similar name!

2 comments on “To Crowcombe with a Thames Valley Bristol L6A”