Back in early July I took a Bristol L5G down to Buckfastleigh to take part in the South Devon Railway’s popular 1940s Festival.

The single deck bus was very familiar to me, having been a regular allocation during my time with Crosville Motor Services in Weston-super-Mare. Ex-Crosville KG131 (1950-built KFM893) still lives in Weston and is now part of the re-launched Crosville Vintage operation so my first task was to drive it down from Weston to Buckfastleigh, a distance of about 80 miles.

The Bristol L trundles along at about 42 mph on the motorway so it took about an hour and a half to complete the journey. On the way I had to face the stiff climb up Haldon Hill which, even with an empty bus, reduced my speed to about 15 mph. It’s at times like these that I feel quite vulnerable on dual carriageways and motorways due to my slow speed, relative to other traffic so I was relieved to turn off the A38 for the final few yards to the station forecourt at the South Devon Railway‘s station at Buckfastleigh.

My first departure wasn’t until 11:00 so I had time for a 45 minute break before starting service. I used that time to wander around the station and found myself in a time warp. I was surrounded by people in 1940s outfits as well as the uniformed railway staff. Visitors and re-enactors alike had gone to extraordinary lengths to enter in to the spirit of the event.

In a field adjacent to the station forecourt there was an impressive gathering of military vehicles and paraphenalia. I lost count of the number of wartime Willys Jeeps! On the station platform I passed a policeman in authentic 1940s uniform. In fact I saw him several times during the day, which turned out to be very hot and humid. To his credit (and probably his discomfort too), he kept his full uniform on all day!

While I waited, a troup of suitably dressed dancers set up beside my bus and did a routine (jive, possibly) for the many onlookers.

My contribution with the bus was to help provide a park and ride service between the station and an industrial premises in Buckfastleigh where there was a large parking area. Already in service was a Grey Cars coach, AEC Reliance 1 RDV. I’ve always been a fan of the stylish Harrington Cavalier bodywork on this batch so it was lovely to see a tidy example close up.

My route to the parking area took me past the entrance to Buckfast Abbey and up a long, steep hill followed by an equally steep descent into the town. The bus was empty but I only just managed to climb the hill in 2nd gear. Note to self: I will definitely need 1st gear with passengers on board!

Arriving at the park and ride site (Devonia Sheepskins) I was greeted by a huge queue of intending passengers. Beyond them in the parking area were several volunteer marshals who kept cars at bay while I turned the bus around. It didn’t take long to fill every seat so I climbed back into the cab and headed back up the hill. As I exited the Devonia site I passed Mrs Busman John in our car coming the other way so gave her a cheery wave. But around the corner lay the South Devon Alps (!) and sure enough, it wasn’t long before I had to make a swift downchange into 1st. After what seemed like an eternity, I was able to make a snatch change up to 2nd but, knowing the downhill gradient that lay just over the brow of the hill, kept it there to minimise braking effort and the likelihood of brake fade at the bottom.

Turning into the entrance to the station I met the Reliance coming the other way and, due to parked cars, there was a bit of a standoff as we manoevered around each other. After depositing my excited passengers outside the station, more orange-vested marshals held the incoming stream of cars while I turned and departed once more.

After another fully loaded park and ride trip, my next outing was a circular trip around the town but this was more lightly loaded. The route took me up and down the same steep hill but carried on past the park and ride site and through the narrow streets of Buckfastleigh town centre. I had heard horror stories from other drivers of buses getting stuck here but I was fortunate this time and, although I had to drive carefully, I didn’t have to do battle with awkwardly parked vehicles.

Arriving back at the station I was glad to step down from the hot cab and take a well earned breather! It was also time for my lunch break so I sought out Mrs Busman John and some shade (strictly in that order) for a picnic lunch. Trains came and went not far from where we were sitting, including this GWR pannier tank in London Transport livery as L.92 hauling a short train of GWR passenger stock.

From the other side of the tracks came the unmistakeable sounds of the Riviera Ramblers (formerly John Shillito’s Select Six), a trad jazz/swing band outfit which regularly entertains the folk of South Devon.

Also parked nearby was the large and looming presence of BR(W) Hawksworth pannier tank No 9466 which has recently been bought by the owner of the bus I’d been driving, bringing his steam fleet (road and rail) up to 6.

The rest of the afternoon saw me do a couple more park and ride trips which were more lightly loaded as people had yet to start flocking back from the station.

There were also two more town tours, one of which was slightly marred by a keen cyclist who was ascending the Alps at the same time as me. I passed him at the bottom of the hill but, as cyclists seem to do when passed by a vintage vehicle, saw this as an invitation to race. Inevitably my speed began to drop off as the cyclist deliberately put on a show of strength and accelerated up the hill. I had no chance and had to suffer the indignity of pulling in behind him and allow myself to be overtaken by a pedal cycle! 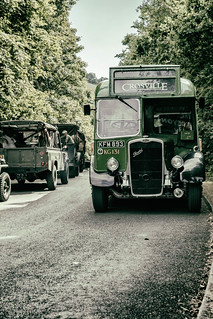 I was glad that I’d remembered to pack my T-key because on my next trip we carried two buggies. Fortunately they weren’t too bulky and folded up small enough to be loaded into the boot at the back.

By now the Grey Cars coach had departed to undertake a private hire duty while, to replace it, the SDR’s own ex-London Transport AEC Routemaster RM1872 (ALD872B) had returned from carrying out a wedding duty earlier in the day. On returning from my final park and ride duty I was confronted by a stream of military vehicles leaving the station. Apparently they were off on their annual road run over Dartmoor.

The RM, with its higher capacity, was able to take care of the remaining park and ride runs so I was stood down at about 16:30. The Bristol L was due to lay over at the station overnight as it was to be used the following day by another driver so, after parking it up and securing it, I returned to Weston with Mrs Busman John by car. The bus, as always, had behaved impeccably and was a delight to drive. I did miss a gear once on one of the early trips and had to bring the bus to a stand to engage 2nd and pull away again. Embarrassing!

Next up: a coastal trip with a Birmingham City Transport Leyland PS2.