There are a handful of timetabled services and tourist operations in the UK which use heritage vehicles for a certain number of days. This summer I’ve had the chance to drive for one of them in Somerset.

Earlier this year I was invited by Steve Morris at Quantock Heritage to join the driver roster for his 300 service from Minehead to Lynmouth. At the time I had very little heritage driving work lined up so I agreed and signed up for a series of Wednesdays during the summer holidays. This was of course done with the knowledge and blessing of my full time employer Bakers Dolphin, as workloads are always lighter during the school holidays.

In a nutshell, the service runs two return journeys every weekday throughout the school summer holidays. It operates from outside the WSR railway station on Minehead seafront and ends in the car/coach park next to the Lyndale Tearooms in Lynmouth. The route goes through Minehead town centre, picking up outside the Co-op by request and then continues out of town to join up with the A39 to Lynmouth. As it is a timetabled public service, the 300 picks up and sets down at any of the bus stops along the route and is used by tourists mostly, including a good number of hikers heading for the high ground of Exmoor.

Quantock Heritage is able to use non-compliant (step entrance) heritage vehicles on this route because the DDA (Disability Discrimination Act 2005) rules have an exemption allowing a non-compliant vehicle to be used on up to 20 days per vehicle in a year. There are three single deck buses available for use so the summer period is amply covered.

The bus I used on all but one of my turns was newly-restored Birmingham City Transport 2257 (JOJ257), a 1950 Leyland Tiger PS2 with a 34-seat front entrance Weymann body. An interesting history of this batch of BCT saloons is on this Classic Buses web page. 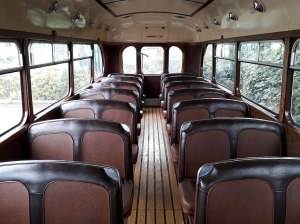 On my first turn I was accompanied by Steve so that he could show me the ropes and we met at a farm on the outskirts of Minehead where the bus is outstationed. The bus is a testament to the skills of Steve and Andrew at Quantock who, together with an experienced joiner who was brought in especially, transformed this former tow bus from a gutted wreck into the smart vehicle pictured above.

For most of its former career 2257 was a ‘One Man Operated’ bus and this continues today, with a Setright ticket machine mounted on a plinth beside the driver. The bulkhead behind the driver’s seat has been cut away to provide access to the saloon and so that the passengers can communicate with the driver.

With all checks done and opening numbers written on the waybill, we set off for Minehead seafront. I used the journey to get used to driving the bus. I found that it was very similar to most of the PD2 and PS2 buses that I’ve driven before, including the rather heavy steering (compared to a Bristol L, for instance). The 9.8 litre Leyland O.600 engine tends to ‘hunt’ noticeably, which was my only gripe. This makes it difficult to drive smoothly at low engine revs because the engine speed is not constant but rises and falls rythmically.

I had to smile when issuing the first few tickets because it was me that set up the print run for the ticket rolls when I was a conductor in about 2007! The bus was about half full when we left at 10:05. Having left Minehead, I drove along the A39 with Steve behind me giving directions. Passing through Allerford, we arrived in Porlock and waited at the stop beside Doverhay car park until departure time. I had arrived early and this tendency plagued my first journey – I had been bombing along the main road at 42mph when 35 would have been ample! After driving through the narrow streets of the pretty village we took a right turn and followed the Toll Road, which climbs through the wooded slopes towards the edge of Exmoor. This avoids climbing the infamous Porlock Hill, of which more anon.

It was here that I met my first challenge: hairpin bends. There are two of them on the Toll Road and Steve talked me through the approach (go down through the gears to 1st). The first bend can’t be done in one go, even on full left lock so I had to virtually bury the nose in the hedge and then carefully roll backwards towards the armco barrier, unwinding the steering at the same time. Then slowly forward in 1st to re-apply full left lock to complete the turn. I was pretty breathless by then!

With a friendly wave to the keeper who stood by the gate at the Toll House we carried on up the twisty road towards the second hairpin bend. I had been told that there is some rivallry among the other drivers concerning this bend. Apparently it is possible, with the right technique, to do it in one shot. Naturally, on this my first attempt, I did not.

It was while toiling up the Toll Road in 3rd gear that the PS2 sprang a surprise on me. It suddenly jumped out of gear! It did it several times before I resorted to giving the gear stick a push every so often.

Leaving the trees behind, we eventually joined the A39 and stopped at the junction to let a hiker alight. There is an old wooden AA box there, a relic from the days when unfortunate motorists could use their AA member’s key to use the telephone inside the box to summon help.

From there progress along the easier grades of the main road was more rapid, broken only by a stop at the County Gate bus stop, which is also a timing point. When the weather is fine, the views up there are stunning. When the weather closes in, and it did once or twice, there is no view at all.

We soon approached Countisbury Hill, where the road drops away sharply towards Lynmouth. Steve advised me to drop down to 2nd gear for most of the way and engage 1st for the last bit right at the bottom which is 1-in-5. Just when I thought everything was going well, the gearstick leapt into neutral and the bus lurched forward. My foot was already resting lightly on the footbrake but quickly applied full brake to prevent the bus from rushing headlong towards the rocks at the foot of the hill, re-engaging 2nd gear pretty sharply. From then on I pulled back on the stick to prevent a re-occurence! Arrival in the car park at the bottom was greeted by several sighs of relief. We counted the number of passengers intending to return on the last bus of the day and then retired to the tearooms for a well-earned cuppa.

At 11.35 we set off with a handful of passengers for the return journey. I had to use 1st gear for the first part of the climb but double de-clutched into 2nd when we reached a short level bit (actually not much more than a bus length). Inevitably we gained a large tailback of following traffic but further up the hill there is better visibility and most of the cars whizzed by.

After passing the old AA box at the Toll Road junction we soon started descending Porlock Hill. Steve gave me instructions on where to pull in and let traffic pass and where to change down to 2nd and then 1st gear for the final twisty 1-in-4 section at the bottom. I clearly remember the drivers on the ‘Exmoor Explorer’ service using the same technique with the Bristol LDL open toppers that we used. Crawling along in 1st gear is embarrassingly slow, especially with impatient drivers queuing up behind! However, it is the only way for a heritage bus with drum brakes to descend safely.

Travelling through Porlock and onwards to Minehead was far less stressful as we trundled along, picking up and setting down passengers on the way. A lunch break was taken after parking in the coach park behind the WSR station. A repeat performance took place in the afternoon, departing at 14:05. My timekeeping on the second trip was better and there were no ‘alarms or excursions’ to mar the afternoon.

I did several more turns with the PS2 and I soon became quite familiar with the demanding route. The weather was variable, sometimes glorious, sometimes wet and miserable.

Mrs Busman John joined me for my final duty and this time we had ex-Thames Valley (originally Crosville) Bristol L6A GFM882. It is pictured left alongside Bakers Dolphin 18 (NGZ1246), a Mercedes Benz Tourismo coach which I have also driven, in the coach park in Lynmouth. As you can see, the weather was dreadful and we didn’t see the glorious views over Exmoor and across the Bristol Channel to Wales.

The AEC-powered Bristol L is slightly underpowered compared to the Leyland O.600-powered PS2 but at least I didn’t have to contend with gears jumping into neutral! Owing mostly to the weather we didn’t carry many passengers but that meant that we could strike up conversations with some of them, including a Canadian lady who was touring the UK on holiday.

On the way back, having just descended Porlock Hill, we were faced with the Bakers Dolphin coach pictured, coming the other way. For some reason I thought I’d have a bit of fun with the other driver and put on a fake Bristolian accent:

So there wuz I, comin’ down Porlock Hill in 1st gear (the only way fer a 1950 Bristol L, mind), when I meets this gurt coach at th’ bottom. So I opens me cab door an’ says to me colleague Izzy, I says “Oi, yur not takin’ that gurt coach up th’ hill, is thee? Watch them hairy-pins, mind!”

Acshully, I wanted to say “Yer, she goes up there like a breeze!”

I was so glad that we didn’t have to pass on the hill itself – that could have been even more interesting!

So that concluded my stint on the 300 Lynmouth service. I thoroughly enjoyed driving 1950s buses in service, even if it was a lightly loaded tourist service with a fairly relaxed timetable. Some might think that using heritage vehicles in this way, particularly in view of the steep gradients, is not the way to conserve them for future generations. But I have to say that, with good maintenance and using up to three buses during the season, the additional wear and tear is manageable. The engines are not unduly stressed either. Even when climbing, we don’t use full revs but are content to grind up the hills sedately in low gear. Will l do it again next year? I might, but it’s a long way to commute from Weston and by then I might be picking up more heritage work from the re-launched Crosville operation which is right on my doorstep.

2 comments on “Driving the 300 heritage service to Lynmouth”