Of the many casualties of the Covid-19 lockdown in 2020, the one that I have missed most this year is the opportunity to drive at various bus rallies and running days. Some organisations have run a virtual event instead, so here’s mine!

There are many buses I have driven or have seen that I would like to invite to my Virtual Bus Rally but I’ve narrowed it down to this selection. The captions describe my reasons for inviting them to my event.

I attended the Exeter Twilight Event a couple of times and I’m shown here having just arrived at Crossmead with Bristol Omnibus LC8518 (LD6B 972EHW). I would invite this bus to my event as it is powered by the relatively rare Bristol AVW engine. And because it’s a Lodekka of course.

I’d like to invite this 1947 ex-Bullock of Featherstone Leyland PS1, mostly because it carries one of only two surviving Barnaby bodies. Also partly because I would love to see it restored and fit to attend a rally. When I used to drive it in Torbay it was desperately in need of attention. By the way, the gentleman waving to me is Richard Wilson (AKA Victor Meldrew), who was just about to board the bus.

Bournemouth Corporation received three Burlingham-bodied Leyland PS2s for circular tours of the resort and remarkably all of them survive. I drove this one when it was in service with English Riviera Sightseeing Tours in Torbay where it was performing a similar function to when it was new. It retains its sumptuous 1930s-style coach interior and that helps to ensure its presence at my Virtual Bus Rally.

I would include this venerable 1930 Dennis GL, fitted with a Roberts toastrack body. It’s a bit quirky to drive, having the accelerator pedal in the middle and the footbrake pedal on the right. It messes with your brain! It is shown acting in a promotional role for the English Riviera Sightseeing Tours operator that I used to drive for until I moved to Somerset.

Although this ex-Southdown Bristol VRT was built in 1977, I would still class it as rather modern. However, it deserves its place on my invitation list because it is now a classic design in its own right, being one of many preserved examples of a sucessful first generation rear engined bus. This particular bus was my regular allocation when I drove for Dartmouth Steam Railway & Riverboat Company in 2013.

This is one of a very few AECs that I have driven. Its owner Steve Goss kindly offered me the chance to drive it when we both attended the WHOTT bus rally in Dorchester. I had driven an open top Bristol Lodekka to the event but was keen to get up close and personal with this Devon General 1965 AEC Regent V because I remember it in service in Exmouth, where I grew up. 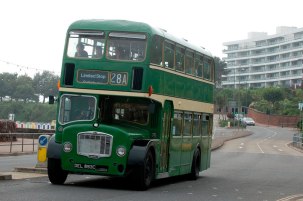 Another vehicle that deserves to be included is this 1965 Hants & Dorset Bristol FLF6G. It became my regular bus at Crosville Motor Services on wedding duties. I’m pictured here driving it along Torquay seafront during the Torbay Bus Running Day just a month after I had passed my PCV driving test.

Pictured at the final WHOTT rally to be held at Westpoint Showground, Exeter, is Exeter Corporation No 5, Maudslay ML3 (FJ9424). The superb livery is the brush-painted handiwork of Ashley Blackman (The Revivist). I was chosen (allegedly because of my skill with a crash ‘box and my slim stature) to drive the bus at its debut event, after a long and costly restoration. I later went on to drive the old girl down to Exeter from mid-Devon to transport the Mayor of Exeter and his entourage to the historic Guildhall for a civic event.

Pictured with me at the same WHOTT event is Nick Muir who is wearing the Exeter Corporation uniform he wore as a conductor on the Maudslay’s successors. Photo by Robert Crawley.

Any bus with an exposed radiator gets my attention. If it’s a Bristol, so much the better. And if it’s wearing a Tilling Red and Cream livery that’s better still! Ex-Crosville (and later Thames Valley) Bristol L6A GFM882 is pictured at a wedding in Crowcombe, Somerset in 2019 on a duty I did for Quantock Heritage. It qualifies for entry because it is very similar to the Wilts & Dorset Bristol Ls I remember seeing in Salisbury, although by then they had a modified full front. 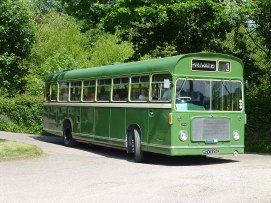 Although not a half cab, this early Southern National Bristol RELL (HDV626E) gets an invite mostly because of its aural effects. I’m pictured here arriving back at Coldharbour Mill, Uffculme, Devon, after a trip through nearby Cullumpton. The throaty roar from the exhaust threatened to shatter the shop windows as we passed through the narrow streets! Photo by Paul Carpenter.

My late father would have seen this bus many times as it passed his house in Wilton Road, Salisbury on the Bath Services route shown on the blind. Any Bristol K would be welcome at my virtual bus rally but this one gets an invitation because it retains its Bristol AVW engine as well as having a family connection. On the occasion shown I was driving it around Minehead in association with a West Somerset Railway special event. 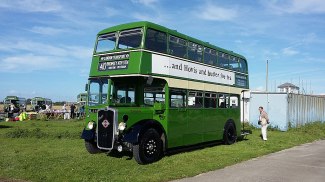 This Bristol K6A (Hants & Dorset TD895 – HLJ44, retaining its AEC engine) earns its place because of the stunning restoration carried out by The Revivist (Ashley Blackman). I remember driving it up to Yorkshire from Somerset – that was a long 35mph slog! It is presented in the livery it wore when new – delivered initially to London Transport in 1949 to cover for RT losses and late deliveries due to the war. 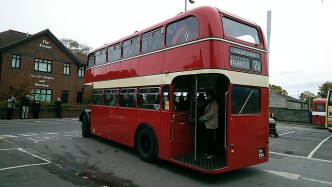 Following many years in storage and several more under meticulous restoration by Roger Burdett, this Wilts & Dorset Bristol K made its debut at the 2014 Warminster Bus Running Day. Roger had replaced the original Gardner 5LW with a larger 6LW but it gets an invitation to my virtual event because it completes the hat-trick of engine options and (of course) because it’s a Wilts & Dorset bus!

Seen after I had driven it to the same event as the previous photo, this 1950 Bristol L5G was another of my regular allocations for weddings at Crosville Motor Services and is a delight to drive. It also sports the attractive dual purpose livery and would contrast fittingly with the Thames Valley bus-spec Bristol L6A pictured earlier.

The aural symphony produced by the 4-speed crash gearbox of a Bedford OB would be most welcome at my Virtual Bus Rally. I’m pictured here driving Duple A-bodied Crosville SL71 (MFM39) along Weston-super-Mare seafront during a 2019 bus rally. Photo by Paul Jones. 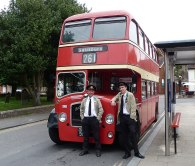 I remember seeing and riding on this bus and its stable-mates in Salisbury, where I often went to stay with my grandparents as a child. The current owners of Wilts & Dorset Bristol LD6G OHR919 kindly let me drive it at the W&D Centenary event in 2015. I’m seen here with my son on layover at Wilton Market Place. Because of my personal connections to this bus it is guaranteed a place in my virtual event!

A year earlier I had the privilege of driving OHR919 during an event to mark the closure of Salisbury Bus Station. Here I’m leading a convoy of Wilts & Dorset buses on the last ever timetabled departure on a suitably dismal afternoon in January 2014.

Whenever I get the chance, I love to create a ‘then and now’ photo. In 2010, even before passing my bus driver’s test, I was allowed by owner Steve Morris to bring ex-Western National no 1935 (Bristol LDL6G VDV752 of 1957) down for the Torbay Vintage Bus Running Day with a few friends. I have in my collection a photograph of the same bus taking a break while in service in the 1970s with Devon General so I couldn’t resist the chance to recreate that shot with the same bus in the same location. I would love to have this bus at my event because I spent many happy hours conducting on it while in service on the ‘Exmoor Explorer’.

Here’s another ‘then and now’ shot. WHOTT has a photograph in its extensive archive which showed Conductor Wooldridge climbing into the cab of Exeter Corporation’s Maudslay ML3 (FJ6154) while learning to be a driver. The photo on the right is me with the same bus about 80 years later. Photo (right) by Robert Crawley.