A recent wedding duty with a heritage bus saw me trundling through Bristol but a couple of restrictions en route caused me to make alternative plans.

But my first task was to get myself up to Bristol in good time to pick up my passengers from a hotel in Henbury. I had the same bus as my previous duty, Crosville DFG81 (Bristol FSF6G 891VFM) but this time getting it out of the garage was much easier. Since I had last been to the garage an electric roller door mechanism had been installed, which was a whole lot easier than doing my best Tarzan impression with the chain operated mechanism on previous occasions!

With up to 50mph available under my right foot, I chose to drive up the M5 and exit at Cribbs Causeway. As the Gardner 6LW engine came up to normal operating temperature I thought I was going to have cooling problems as a spray of blue coolant began to coat the bonnet and front bulkhead window. I watched carefully, hoping that it was only the result of an overfilled header tank. And so it turned out – the spray from the coolant cap dried up after a while and my anxiety level dropped from ‘tense’ to ‘mild’.

I had researched the pickup point a few days earlier and decided that it wasn’t possible to drive up to the hotel itself due to the narrow gateway and lack of space to turn around again. The only other option was to pick up at a bus stop nearby and I had arranged this with the client, via the Crosville Vintage office. Having made swift progress in the Lodekka and unhindered by traffic delays, I arrived with time in hand so I pulled over on Crow Lane in Henbury, rather than obstruct a service bus stop for longer than necessary. Anyway, it gave me a chance to find a cloth and wipe up the film of coolant from the bonnet and front window.

I drew up at the hotel bus stop shortly before the arranged time and wandered up to the hotel, meeting one of the guests in the car park. I pointed out where the bus was and waited for my passengers. What started as a day of brilliant sunshine turned grey and showery once most of the guests had arrived, prompting a mass exodus to the lower deck. However, by the time the last passengers had boarded, the sunshine had returned and most of the guests had returned to the (slightly damp) top deck.

My first task on leaving was to turn the bus around and head back the other way. But before that I donned my face mask (Covid-19 precautions still prevailed at this time) and told the guests not to be alarmed when I reversed the bus into a turning and came back the other way!

The journey to the church in Leigh Woods took us down Whiteladies Road, which gave everyone on the top deck the chance to wave and shout to passers by and to the many motorists who honked their horns as we passed.

The most direct route to the church would have taken us over Brunel’s famous Clifton Suspension Bridge but there is a 4 ton weight limit there so our route took us over the Cumberland Basin instead, where the top deck passengers could view the bridge from afar.

By now the weather had warmed up considerably and I was beginning to feel overdressed and overheated. I had decided to wear my heavy winter uniform as the weather forecast had predicted a cool start and end to the day but I was now regretting it! This was confirmed a short time later as we began climbing up past the Ashton Court estate and the engine started working hard. As the Lodekka climbed, so did the temperature in the cab! Speed soon dropped away and I dropped swiftly into third gear and then, picking my moment carefully, into second. This has to be a finely judged moment – too soon and the revs will be too high to engage the lower gear, too late and the bus would lose momentum and come to a stop before the gear could be engaged. Progress from then on, as you can probably imagine, was slow. I was conscious of a growing tailback behind me but fortunately I could see that the gradient eased briefly further up, which gave me the chance to change up to 3rd. It’s at moments like this that the necessary pause in neutral while the revs die away seems like a lifetime, while precious momentum is lost almost as quickly. My judgement didn’t let me down and we soon began to pick up speed again.

We briefly crossed the A369 and entered the leafy Leigh Woods. Dodging the low branches, I pulled up outside the Parish Church about 10 minutes before the allotted time. The passengers alighted, casting a few compliments in my direction, and gathered in the dappled sunlight before going inside. As I ate my lunch in the lower saloon I was joined by the driver of a 1937 Daimler Limousine from Vintage Wheels. We chewed the fat (as I continued to chew my sandwiches) and talked shop. He works in the bus and coach industry and coincidentally lives just round the corner from me in Weston-super-Mare! He decided to re-position his car in readiness for the happy couple’s re-appearance. The sound of the Daimler’s straight-eight petrol engine was glorious!

Once everyone was on board again and I had been given the nod to proceed, we retraced our route back across the River Avon but this time ending up at The Orangery at Goldney Hall. I now had a dilemma. Do I tackle the 1-in-7 narrow winding ascent of Constitution Hill, with Goldney Hall at the top? Or do I take the easier but longer route around the Clifton Triangle and Merchants Road? I’m not one for taking risks unnecessarily, so it was the second option which won in the end. The Lodekka I was driving has a higher ratio rear axle so I didn’t want to risk stalling on the hill, as first gear is not as good for climbing hills as you might think. 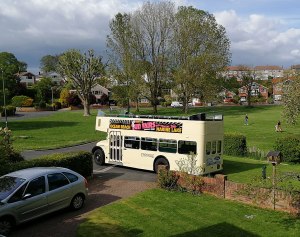 With my passengers safely deposited I now had a long break before returning to collect them at 20:30. I had arranged to meet Mrs Busman John at her father’s house in Mangotsfield so I drove the empty bus through the city centre followed by a quick blast up the M32. As I finished reversing the bus into the cul-de-sac, I was aware of several pairs of eyes staring at the Lodekka. They belonged to the great-grandchildren of one of my father-in-law’s neighbours, so I invited them to come and take a closer look. Accompanied by their parents, they headed straight for the top deck and listened wide-eyed as I told them about the bus and what I had been doing with it that day. It’s not every day that a vintage open top bus visits the quiet neighbourhood. “Look Dad, there’s a wedding bus in great-grandma’s road!”

Later that evening I drove back down to The Orangery and waited at the top of Constitution Hill, opposite the venue’s doorway. The agreed collection time came and went and there was no sign of returning guests but I wasn’t too surprised. A while later a very apologetic Best Man came over and asked if I could give them a bit more time. We discussed options and I agreed to let them have another 30 minutes, for which he was grateful.

Just as it was getting dark, the guests began to trickle back to the bus. I switched all the lights on and drifted down the steep hill in 2nd gear, promptly followed by a steep climb up Jacobs Wells Road towards the Clifton Triangle. As we trundled up Whiteladies Road there was plenty of whooping and shouting from the top deck as we passed numerous bars and street cafés packed with people enjoying an evening beverage.

I enjoyed the drive back to the hotel, savouring each well-practiced gear change as each one slipped quietly into place. It’s so satisfying to have re-awakened my crash-box skills after such a long break! Back in Henbury, the guests headed for the hotel and more partying, I suspect. Pleased with my day’s work, I climbed back into the warm cab and headed for home via the filling station to top up the tank.

In other news, my day job with Bakers Dolphin continues to come back to life after the long lockdown. Most of my work is still with school contracts but some tours and day trips have restarted, to the delight of my colleagues. Next up, another wedding with a different bus but including another steep hill dilemma.

One comment on “Open top Lodekka to Leigh Woods wedding”