Occasionally I’m asked to do some interesting jobs for Bakers Dolphin, in between school runs. One of these saw me collecting a 2018-plate Mercedes-Benz Tourismo coach from Gloucester. 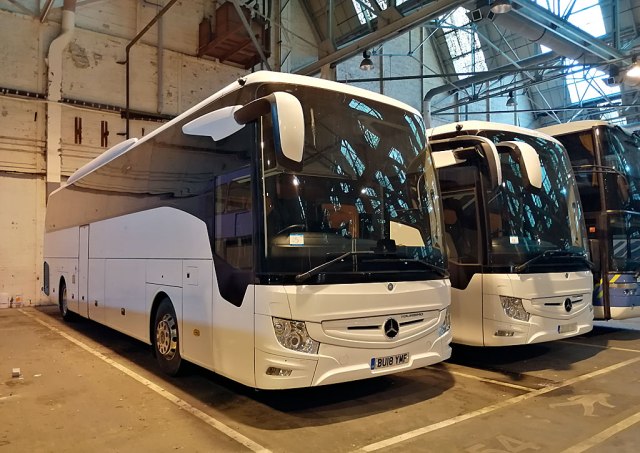 The two coaches pictured above have recently been purchased by Bakers Dolphin for day trip and tour work, an indication perhaps that things are looking a bit more rosy for the company despite the loss of income suffered during the current Covid-19 pandemic.

A colleague and myself were driven up to an industrial estate in Gloucester by another driver to collect the pair and, after dealing with the paperwork, we were given the keys and asked to see if they would start. My heart sank. Apparently they had been sitting in the yard for a few weeks before the sale to Bakers. Sure enough, neither would start although there was just enough juice in the batteries to light up the dashboard.

I found the yard supervisor and gave him the bad news. Fortunately for us, he had a jump pack in his office and duly wheeled it out. “I don’t know if there’s enough charge in it to start two coaches but we’ll have a go!” My heart sank for a second time. We opened the battery locker on the coach that my colleague was going to drive, hooked up the leads and started it up without any trouble. Then it was my turn. Once again I connected the leads, turned on the jump pack and sat in the driver’s seat. After saying a little prayer I turned the key. After a heart-stopping moment the 11 litre diesel at the back came to life. What a relief!

Matey wandered back to his office with his jump pack in tow while my colleague and I completed our walkaround checks. Fortunately, apart from a non-standard n/s mirror being fitted to my coach, everything checked out. We both decided that there was enough fuel in each coach to get us back to Weston without the need to refuel but, if there wasn’t we had come prepared with some petty cash.

Taking great care not to scratch Bakers’ new coaches, we headed back to the M5 motorway and headed south, destination Weston-super-Mare. These modern coaches have all the latest gadgets and gizmos (aircon, satnav, toilet, galley, automatic everything) and are very comfortable to ride in. 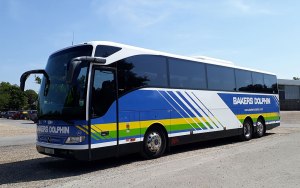 The two Tourismos, at the time of writing, remain in the Bakers garage still in plain white. In due course they will go through the company’s paint shop to enter service in the standard blue and white livery like the one pictured here.

END_OF_DOCUMENT_TOKEN_TO_BE_REPLACED

In Steve’s first contribution to my ‘Busman’s Holiday’ blog, he takes us along with him on the platform – and the cab – of ex-Stockport Corporation Leyland PD2 HJA965E. 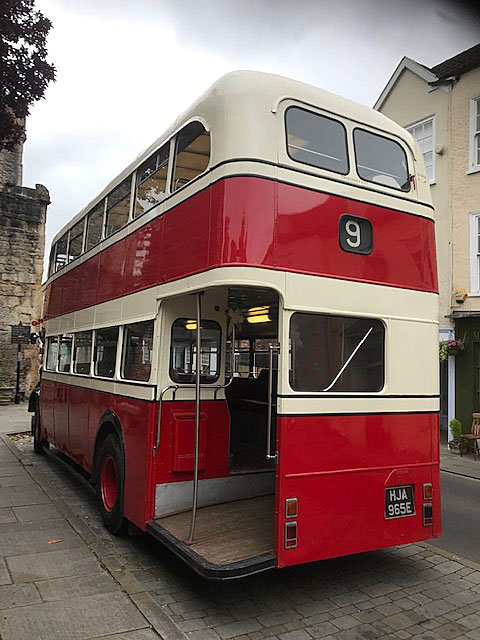 ‘Twas the night before my second (ever) Crosville Vintage ‘heritage bus’ job as a conductor, that I prepared my uniform. Black shoes with parade gloss kiwi, grey trousers, respectable shirt and tie – with my best blazer!  Well, it was somebody’s wedding so I had to do my bit. I wore my grandfather’s FF conductor’s badge (most probably issued in Norwich, because he once worked as a driver and conductor in Norwich and North Norfolk).

The 19th June 2021 arrived.  With (dare I say) ‘child-like’ excitement I stood at the side of the Wellington Road in Taunton, waiting to be collected by the designated driver for the day… the very ‘dapper’ Andrew. Resisting the temptation to use my best ‘hail and ride’ signalling, I saw this beautiful looking 1967 Leyland Titan PD2 (HJA 965E) approaching from the direction of Silk Mills Road.  Resplendent in its red/cream paint, with the obligatory ‘Number 9’ route displayed in the blind, I greeted Andrew as he pulled up at my imaginary bus stop.  We chatted briefly about the day ahead, before proceeding to Glastonbury and The City of Wells – in our ‘Transport of Delight’.  We proceeded through the bustling Taunton Town Centre, with shoppers gazing in awe as we passed by.   Happily standing on the platform (I hasten to add, with both hands lightly gripping the handrails) I smiled at shoppers as we trundled towards the outskirts.  I am now well acquainted with the words “ I used to go to school on one of those” from many people of a certain age, as I travel to a growing number of events and venues – and I confess it makes me chuckle.

END_OF_DOCUMENT_TOKEN_TO_BE_REPLACED

I’m very pleased to be able to introduce to you a fellow busman who, like me, enjoys being out and about on board heritage buses and coaches. I’ve invited Steve SD (pictured below, left) to contribute some of his more recent adventures. 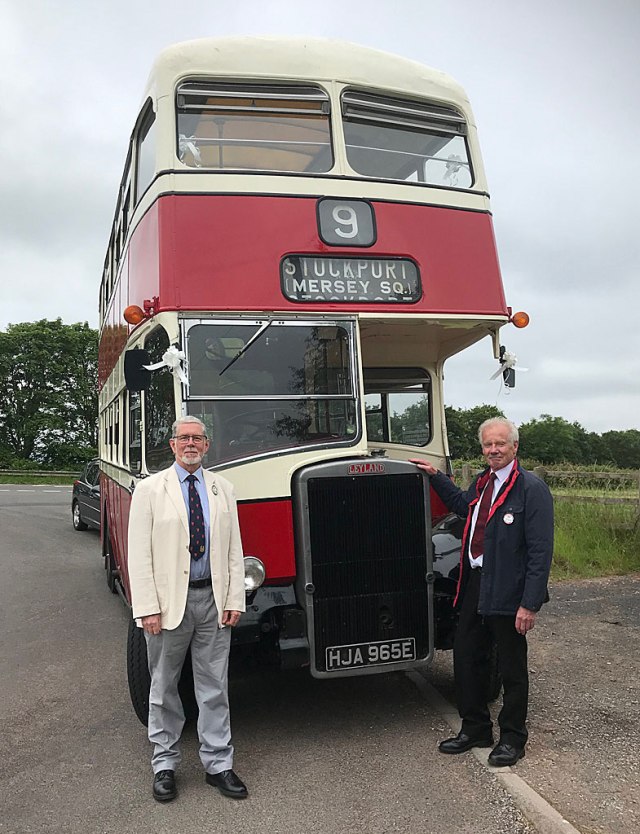 But before I share the first of these, here is some background info on his journey so far.

Steve served in HM Armed Forces from the age of 15-22 and then took a career in Public Service until 2002. A year later Steve qualified as a DVSA (Driver & Vehicle Standards Agency) Approved Driving Instructor (cars), teaching young (and not so young) people to pass their car test.

In 2007, a major highlight for Steve was being accepted for a contract in the Middle East as a Fleet Driver Trainer in Qatar, where he was engaged in the assessment and training of multi-national employees who needed to drive utility vehicles and large buses at the oil refineries (and within city environments) across the State.

2008 saw Steve re-engage in the training of people in the UK to drive cars and buses.  In 2009, Somerset County Council engaged Steve’s qualifications and skills in the training to test standard, and the triennial assessment, of Local Authority minibus drivers.  Because of his position as an independent Fleet Driver Trainer, Steve was happily engaged by a smattering of bus and coach operators across Somerset to train employees to pass their Category D bus/coach driving test.

Finally, this year (2021) Steve decided to hang up his hi-vis jacket and relax into calm retirement.  That is, until he discovered the delights of the heritage bus and coach world.  Putting his trainer qualifications aside…  Steve will unashamedly tell anybody and everybody that he has found it very difficult to learn the dark art of driving a heritage bus – and appreciates any help offered by ‘those who know’!

*Since passing his PSV driving test all those years ago, Steve has driven a variety of buses coaches countless times on an ‘ad hoc’ basis for many different operators across Somerset (including National Express Bristol – London).  Whether for morning/afternoon school runs, swimmers, private hire to the sea-side, theatre and adventure parks, Steve has absorbed a lot of experience of the bus/coach industry.

I am looking forward to reading about some of Steve’s exploits on the platform and perhaps in the cab too. Please join with me in welcoming Steve to ‘Busman’s Holiday’!

You won’t have long to wait for Steve’s first blog post – it’s already in preparation.