No, not the building society of the same name. These two Gloucestershire towns were my twin destinations last weekend.

Once again I was allocated DEL893C (seems to be my regular bus) for the wedding duty which took me to Hucclecote Parish Church. Pickup time was 09:50 in Cheltenham which would have meant leaving the garage in Weston-super-Mare at about 07:15 so Mrs Busman John and I picked up the Hants & Dorset Bristol FLF on Friday evening so that I could set off for Cheltenham at a more reasonable hour!

I had decided to take the direct route through Bristol as I’d discovered that it would take 8 miles off the total distance, compared with going all round the city on the M5/M4. It was a pleasant drive at that time in the evening. Rush hour had been and gone, leaving the streets nice and empty for me and my lumbering leviathan! Passing along streets that used to see many Bristol FLFs in the 1960s and 70s brought an inner sense of satisfaction, particularly when I passed what used to be the bus depot in Staple Hill. 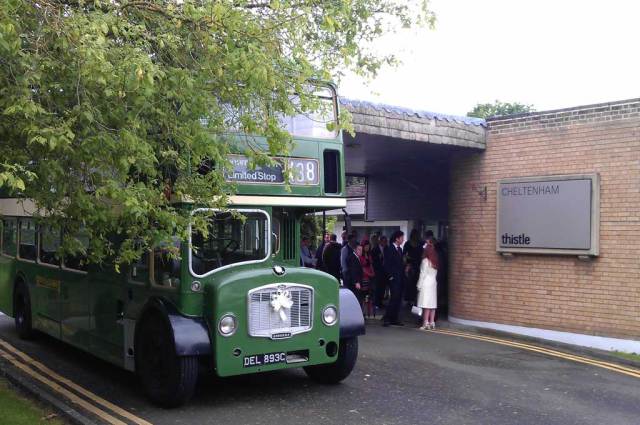 My pickup point the next morning was a hotel in Cheltenham, not far from the motorway. The drive up from Bristol, starting at a much more reasonable 08:15, was as uneventful as the terrain was flat. Gloucestershire is relatively FLF-friendly compared with Devon, which is positively mountainous in places! The FLF I had today is only powered by a Gardner 6LW which, when fully laden, feels quite underpowered if there are any gradients on the route. Thankfully there were none today and, once loaded at the hotel, I found I had seats to spare so we flew along the A40 to Gloucester at 50mph!

There was only one glitch today and that was self-inflicted. For the first time since I started driving professionally, I took a wrong turn. I left one roundabout in Gloucester too early and found myself doing a tour of a singularly unattractive industrial estate. Having looked at Google Maps very intently the day before, I was hoping that if I kept going, I would eventually come out onto the road which took me to the church. As my hunch turned out to be correct you would have heard an enormous sigh of relief, if it wasn’t for the engine noise in the cab!