Alongside occasional design work recently, I have also been tasked with delivering and collecting some of the Crosville fleet in preparation for the 2017 season. 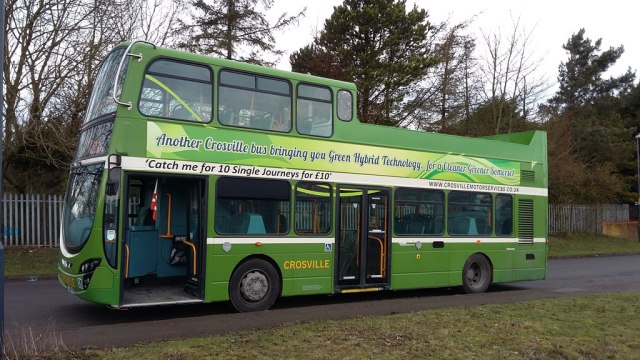 This has meant a lot of solo mileage but fortunately the destinations have been familiar, so not too stressful. The first of these movements, a few weeks ago, saw me taking one of the Crosville hybrid deckers up to the Yorkshire premises of Cobus, the bus restorers. Last week I took another of the Wrightbus hybrid buses up to Cobus and, the following day, brought the first one back to Weston-super-Mare as its conversion to open top had been completed.

As before, the journey was slow and tedious. Don’t get me wrong, the bus is dead easy to drive around town as it was originally used on the (mostly flat) streets of London. But put a gradient in front of it and, just like a tired donkey, it gets all moody and unresponsive. Normally, power comes from a Cummins diesel engine which charges the propulsion batteries but in Direct Energy  mode (used for these long journeys) these batteries are switched out and the bus relies solely on the relatively small diesel engine. Propulsion still comes from the Siemens electric traction motor but it can only deliver the energy provided by the diesel engine. Which isn’t nearly enough on hills. Even on motorways, where gradients are usually gentle, our speed dropped away alarmingly. At times we were down to about 30mph!

END_OF_DOCUMENT_TOKEN_TO_BE_REPLACED

Another delivery duty for Crosville Motor Services recently took me on a return journey to Yorkshire, this time with a hybrid double deck bus.

It’s a journey I’ve done several times before so I hardly used the printed route notes I always carry in the cab. On previous journeys I’ve delivered a 1950 Bedford OB and a 1949 Bristol K6A to the restoration premises of Cobus in Yorkshire.

For various operational reasons I was unable to leave the depot until after 10:00 but, not having driven one of these hybrid buses before, I was glad to be able to accompany another driver on a similar bus as we took it into Weston-super-Mare town centre to swap it with the bus I was to take north. Watching his every move, I soon learned that it was really no different to driving any other modern bus with an auto gearbox.

If you haven’t already guessed, a hybrid bus uses a combination of battery power and energy from a small diesel engine for propulsion. Before I left the depot an engineer flipped a couple of switches behind a panel to put the bus into ‘DE’ (Direct Energy) Mode, which meant that the batteries would not be depleted on the long journey. The bus is built for Euro 6 economy on urban services but would require diesel power throughout the 260 mile trip to Hunmanby.