So I finally made it to the Warminster Vintage Bus Running Day! It was a long but satisfying day as I drove a shiny Bristol L bus around the country lanes in the county of my birth and also carried a Very Discerning Passenger.

I’ve known about this high profile event for some time but have not managed to attend until this year. As some of you will know, on most Sundays you will find me in church but I like to make one or two exceptions during the year and this time it was Warminster’s turn to make it onto the calendar! I didn’t manage to take many photographs (too busy driving) but the best of the bunch are here, starting with this peaceful scene outside the Parish Church at Sutton Veny.

My day started early, arriving at the Crosville depot at 08:15 to prepare Crosville KG131, a 1950 Bristol L5G. The management had very kindly agreed to let me take this fine looking bus to Warminster. They had cleaned and polished it especially – even the tyres were shiny! Paul, a fellow driver with whom I’ve been teamed up before, was already busy preparing Southern National 2700, an early Bristol RELL. He too was going to Warminster but left ahead of me (as did a Bath Services KSW6B in the hands of a former owner) as his first duty on the extensive programme of free services was earlier than mine.

Everything on the bus was ticketty-boo so, after topping up the fuel tank, I set off. My route took me through Cheddar, Wells, Shepton Mallet and Frome, and the long journey provided a useful opportunity to brush up my driving technique. These events are fun but I do find them a bit daunting because of the high percentage of enthusiast and bus-owning fratenity that they attract. These guys flock to the older vehicles to ‘sample the ride’ but really they’re dying to see the driver make a pig’s ear of the constant-mesh gearbox! But having driven this particular gem several times this year on private hire duties for Crosville I was quite confident I could give my passengers a good ride. 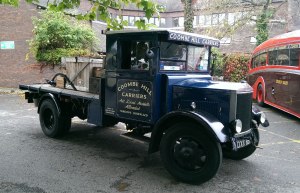 With at least 40 vehicles attending, including this charming 1930 Albion lorry, the small-ish car park which served as the centre of operations was run with military precision. Full marks to the organisers and marshals, who knew just where every bus (each one carried a running number) was supposed to be, just by checking it on a list.

I was directed to a parking space near the exit, which gave me a chance to freshen up and meet up with my conductor. He’d been for a ride on a Silver Star Atlantean and got to our bus in the nick of time! Fortunately I’d sent him all the route and timetable details previously so our briefing was, well… brief! I noticed another Bristol L lurking in the car park with the same destination and route number as ours and discovered that we were to run together. Just as well, because the queue at the departure stand was huge!