Although it originally had a Mumford body, Crosville’s example now has a Beadle 36-seat body similar to one I’ve featured here before. Wilts & Dorset  504, a 1938 Bristol J (pictured below), also had a Beadle body and was transferred from Hants & Dorset in 1952, according to the notes in my Dad’s photo album.

As you will see from the photo of ETT946, it has managed to retain its original high-mounted radiator in common with only a handful of surviving Bristol L buses. Usually these were replaced by the later PV2 radiator when re-bodied. This example has been in private ownership for many years, spending most of the last decade at Winkleigh with the West of England Transport Collection. I’m grateful to Les Eddy for his permission to use the photograph at the top of this post.

The bus has seen better days and, although restored many years ago, will need a thorough re-restoration before it can join the active Heritage Fleet at Crosville. It will have to wait its turn in the queue! One day it should look a bit like this fine example, a 1940 Beadle-bodied Bristol L5G from the Western National fleet.

Apparently the bus is still driveable and it may make the journey to Somerset under its own power. I’ve volunteered for that job but a fair amount of preparation will need to be done before it is fit for the road. Watch this space!

I seem to have done a fair bit of delivery driving recently. I wrote a while ago about taking the Sightseeing Tours Bristol LH charabanc to Exeter and back for some attention to the paintwork. I also drove an open top Leyland PD2/3 to Plymouth and back for the same operator for some mechanical repairs and servicing. Probably my last driving duty for 2015 will be to return a 2009 Mercedes Sprinter minibus from Stoke-on-Trent after some attention by Reliance Bus Works. I drove it up last week and the trip was comfortable and trouble-free, which contrasts starkly with some of the delivery journeys I’ve done with more elderly vehicles!

Finally, after many months of searching, I have been able to fit a pair of nut guard rings to Torquay’s sightseeing bus, Leyland PD2/3 FFY403. 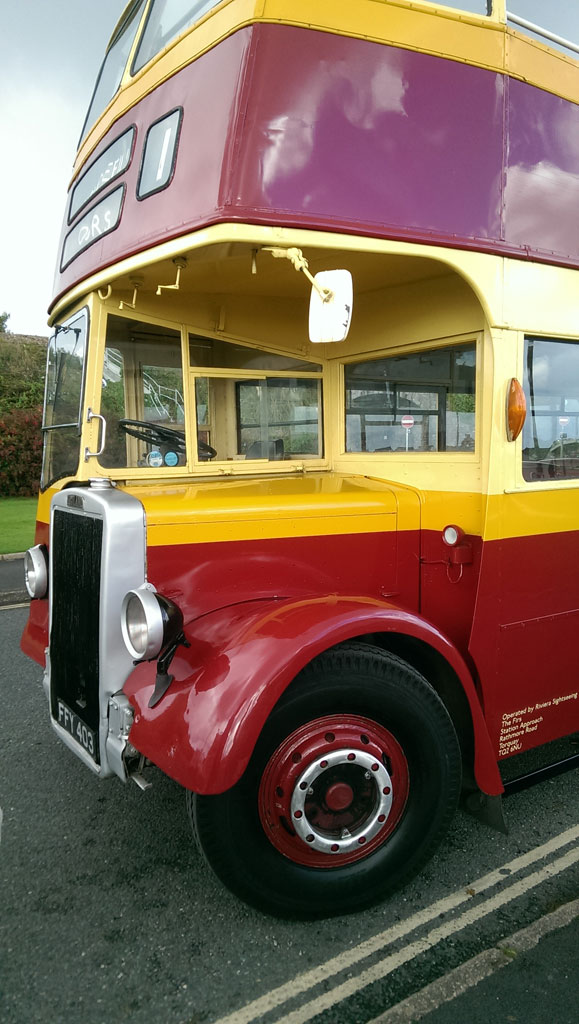 The bus was delivered to English Riviera Sightseeing Tours in Torquay in 2013, minus her nut guard rings. These are normally fitted to the front wheels to cover the wheel nuts and were a standard fitting on most Leyland and AEC vehicles. But, sometime in the recent past, the PD2’s rings had been removed by a previous owner and not replaced.

I’ve always thought that, ever since seeing the bus parked outside Torquay railway station shortly after delivery in 2013, she looked ever so slightly ‘undressed’ without her rings. It bothered me every time I climbed into her cab too, and not just for aesthetic reasons. The ring on the offside provides a very useful stepping point for the driver as he climbs up into – or down from – the cab. I learned this the hard way several times when, in wet weather, my right foot slipped off the wheel as I tried to gain a secure foothold.

Eventually, after posting requests and emailing several friends in the heritage bus world (I even tried the Leyland Society), Dan Shears came up trumps. He runs the West of England Transport Collection at Winkleigh, Devon. His father Colin started the collection in the 1950s and always had a soft spot for Leylands. As a result, Dan has inherited a large number of Leyland vehicles along with sundry spare parts. He sent me a message one day to say that he’d found two rings and would I be interested as he already knew I was keen to acquire some. With this good news to hand, I approached the owner of the bus and happily received a favourable response. So a deal was done and a package duly arrived towards the end of the season. Like a cat with two tails, I offered up the rings to the wheels, which still had their mounting studs in place. A perfect fit!

I took them home and spent an hour or two with a wire brush to bring them back to life and the next morning fitted them to the bus before my next driving duty. I am very pleased with the result and am grateful to the owner of the bus for agreeing to buy them and of course to Dan Shears for finding them.

A few days ago I was able to add 2 more buses to my list of those driven. City of Exeter Guy Arab IV TFJ808 and Bournemouth Corporation Leyland PS2/3 JLJ403 had been on loan to Crosville Motor Services from a private collection and I was given the chance to help drive them back to their home depot.

My driving partner for the day was a chap called Paul, a regular visitor to this blog and at one time a driver for Hants & Dorset.  We decided that, as we wanted to experience driving both vehicles, we would swap over part way to Devon. These 2 buses come from the West of England Transport Collection at Winkleigh, so we had quite a long drive ahead of us. This shot of the Guy at the depot might appear to show repairs in progress but actually shows the ever resourceful workshop manager estimating how full the cylindrical fuel tank was before we set out!

I elected to drive the Leyland single decker first so, after all checks had been done, we set off for the filling station. The PS2 is a relatively easy bus to drive, having a gearbox with synchromesh on all but first gear. While at Crosville it had never been used in service as quite a number of restoration and repair jobs needed to be done to bring it up to service standards so it appeared to be rather ‘tired’ in places. On this very hot day, I might have benefitted from more ventilation in the cab but the front window hinges were seized solid! The full-front body not only seals the driver into the same confined space as the engine, it also gives him the full aural benefit of it too! I would not have liked to have been cooped up in that cab all day when the coach (as it was configured then) was operating the Town Circular Tour for Bournemouth Corporation. 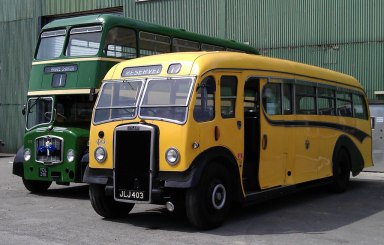 We had decided that, as neither bus was suited to motorway driving, we would stick to A-roads as much as we could. So, having topped up the fuel tanks, we set off southwards in stately convoy. We paused on the outskirts of Highbridge to check that we hadn’t sprung any leaks or lost any wheels. Despite its rather run-down appearance, the PS2 drove beautifully. The steering is light (for a bus of this era), with no wobble or play. The synchromesh works as advertised, meaning that I didn’t need to double-declutch as I would do in a Bristol Lodekka. In fact the experience was very similar to driving the Southport PD2 in Torquay recently (see previous post). And so it should, they were built within 2 years of each other and feature the same engine/gearbox combination.